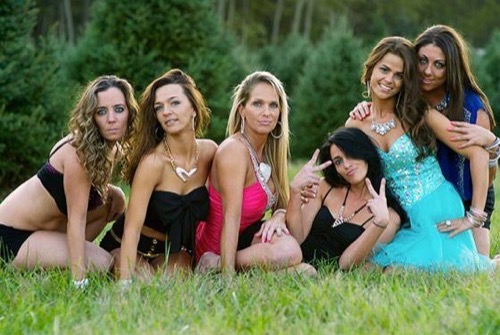 Tonight on TLC GYPSY SISTERS continues with an all new Sunday June 21, season 4 episode 4 called “A Drum, a Rattle, and a Gypsy Battle” We’ve got your recap down below! On tonight’s show a spiritual session is planned by Dovie for the women to work out their issues.

On last week’s show a fight erupted when Kayla, Annie and Mellie confronted Nettie over her trash-talking online, and the situation escalated into legal action, so JoAnn asked her sister to help restore peace in the family. Did you watch the last episode? If you missed it we have full and detailed recap, right here for you.

On tonight’s show per say the TLC synopsis “a spiritual session is planned by Dovie for the women to work out their issues, but things go from bad to worse when a fight breaks out between Dallas and Annie.”

Tonight’s episode is going to be another drama packed one, which you won’t want to miss. So be sure to tune in for our live coverage of TLC′s Gypsy Sisters Season 4 episode 3 at 9PM EST! While you wait for our recap, hit the comments and let us know how excited you are about the new episode of Gypsy Sisters tonight.

JoAnn has finally convinced her family to go see a shaman on tonight’s episode of “Gypsy Sisters” and yet, no surprises here, the spiritual journey ended in disaster.

And, you know what, feel sorry for JoAnn!

Poor JoAnn. She was the only one that actually tried to mend fences. Yet, her family couldn’t even respect her enough and give the same effort.

JoAnn truly believed that the family could drop everything that had went on before. And, though it’s against everything she believes, she even looked to an unknown “spiritual” realm for help. But with tempers flaring, especially with this family, her plan was always going to blow up in her face. It was a good try; however, allowing these women to gain easier access to each other was a mistake.

At the end of the day, Dallas’s issues with Annie went beyond any petty grievances. Dallas believes Annie has done more than just slept with her ex. She’s now sure that Annie has badmouthed her so bad that her ex-husband is purposefully keeping her away from their daughter.

Dallas hurting and lashing out at Annie is easier to do than risk further agitating her ex. And after Dallas nearly got into a fight with Annie outside of the shaman’s house, Kayla and Nettie realized this feud had gone on long enough. So the two later met up alone.

And, surprisingly, Nettie confessed to what she did. She owned up to the fact that she was the one posting things online about Kayla and Mellie. She said she felt hurt that Mellie “chose” Kayla over her and that she was lashing out when she really shouldn’t have. So Kayla then felt like she should return the gesture and drop her cease and desist.

In order to move on, they have to forgive each other and it seems that after they sat down they both remember how important family was.

But sadly they aren’t the only problems. Dallas, Annie and Nettie’s side drama with Mellie all needed to be cleared up as well. So when Kayla and Nettie left their sit down – they each said they were going to work on bringing the family back together.

Nettie spoke to her daughter and, despite Dallas’s misgivings, she convinced her to calmly speak with Annie. And on Kayla’s part, she did the same with Annie. So the two women that apparently needed a good talking to then had their own sit-down.

And as it turns out there is a problem.

Dallas was right when she said that Annie was trying to keep her away from her ex. Oddly, it appears that Annie is jealous of her cousin. As in she doesn’t want her boyfriend to be hanging around with his ex-wife. Even it is for their daughter’s sake. So, yes, Annie did try to keep the parents apart.

But Dallas had to tell her that she was always going to be part of her ex’s life. After all he is the father of her child and Dallas knows that she has to stay on speaking terms with him. Yet, once she saw how worried Annie was, Dallas then attempted to reassure her.

She’s moved away and has also gotten remarried but she still had to reassure Annie that she didn’t want her ex back.

So Dallas made her position clear. She explicitly stated that she’s only back in town in order to visit her family. But she also included that she would like to see her daughter a little more often. And Annie then said she wouldn’t get in the way but later in her confessional she admitted to being glad that Dallas would soon be leaving.

Meaning, no matter what was said, Annie is always going to view Dallas as a threat to her relationship.

And with those two somewhat settled, Nettie and Mellie finally forgave each other. It seems that once Nettie began apologizing – she couldn’t stop. And all Mellie really wanted was an apology.

She was tired of her sister treating her like a baby and she just wanted Nettie to see her as an adult.