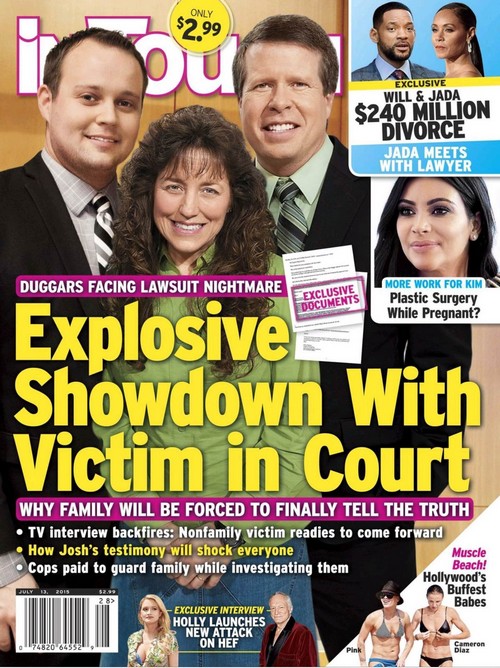 The Duggar Family sex scandal is about to get a whole lot worse. Jim Bob and Michelle Duggar were apparently perfectly okay with their 14 year old son Josh Duggar molesting his little sisters because he was just “curious” – but the parents of the other little girl he molested that was sleeping in his sisters’ bedroom are not happy about it. Shocker.

The July 13 cover of In Touch Magazine reveals that the Duggars are facing a “lawsuit nightmare,” and there will be an “explosive showdown with victim in court.” 19 Kids And Counting fans were obviously shocked by the sex scandal and molestation, but what was even more shocking was how the Duggar Family acted as if it was perfectly normal for teenage boys to touch their little sisters. And, it is believed that there is a whole lot more to the story than the Duggars are copping to. But, if they go to court – they will have no choice but to tell the truth, the whole truth, and nothing but the truth.

According to In Touch Magazine, “a non-Duggar family victim is preparing to file a civil suit against Josh for molesting her when he was a teen, leading to an explosive showdown in court. Josh ad his parents, Jim Bob and Michelle, will be forced to reveal in court all of the details about the scandal they have been trying to cover up.”

An insider at the Arkansas police station that is handling the sex scandal dished to In Touch Magazine, “I have heard that a victim is preparing to sue. This whole sordid affair with Josh rattled a lot of people, including the victim who has had to relive this whole nightmare all over again, after watching Josh’s parents go on TV and whitewash the whole incident.

There may be a statute of limitations on the molestation that prevents anyone from formally pressing criminal charges against Josh Duggar – but they can still go after the 19 Kids And Counting star in civil court, and that is exactly what they plan to do. Michelle and Jim Bob will most likely be brought in to court as well to testify as witnesses, and they could be facing a lawsuit of their own for trying to cover up the crime and basically acting as accessories.

Do you think Josh Duggar’s victim will win their suit against the reality TV family? Is it a little suspicious that they waiting until now – when the story is in the news, to file a suit against Josh? Let us know what you think in the comments below!