Kate Middleton Forced Back To Work 6 Weeks After Princess Charlotte’s Birth: Too Terrified of Queen Elizabeth To Request Longer Leave! 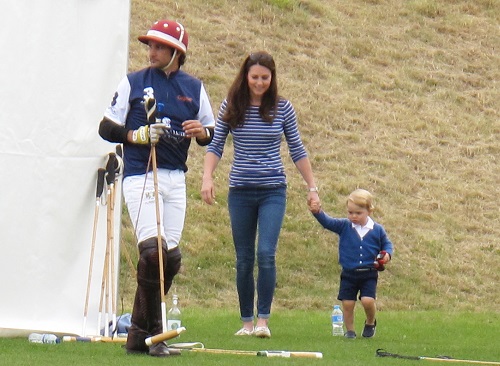 Prince William’s wife, Kate Middleton, just gave birth to Princess Charlotte Elizabeth Diana on May 2, but the Duchess of Cambridge is already back to work and picking up her royal duties after just six short weeks of maternity leave. On June 13, Kate Middleton stepped out with her husband, Prince William, and his little brother, Prince Harry, to attend the annual London Parade, Trooping The Colour, to honor Queen Elizabeth’s birthday. Despite reports of Kate Middleton hiding away at Amner Hall and battling depression and alleged eating disorders, the mom of Prince George and Princess Charlotte appeared bright-eyed and bushy-tailed for the event.

We can’t help but wonder how just six weeks after giving birth, and trying to balance raising a toddler and a newborn baby, Kate Middleton appeared so well put together at the Queen’s birthday celebration? According to the June 29 edition of Life & Style Magazine, Kate Middleton may not have been as bright-eyed and bushy tailed as she appeared on June 13, but she didn’t want to upset the Queen again. Apparently, after George was born, Queen Elizabeth was not impressed that the Duchess of Cambridge took so much time off from work, so this time around Kate wanted to get back to work and doing appearances as soon as possible so as not to upset the Queen.

Life & Style Magazine’s inside sources revealed, “She took a lot of flak for her long maternity leave after having George and the Queen was not amused. Kate was determined not to offend her again.” Of course, Kate’s fame-hungry mother, Carole Middleton, helped whip her back into shape after Princess Charlotte was born. She clearly had her own agenda though. Carole couldn’t wait for her daughter to get back into the limelight and start making headlines again. According to Life & Style’s sources, “Kate got plenty of help from her mom, Carole, who helped her lose her baby weight and boosted her energy by making her protein smoothies and healthy dishes with quinoa.”

Are you surprised that Kate Middleton was able to bounce back so quickly after Princess Charlotte’s birth? Did she really have a choice though? Let us know what you think in the comments below!