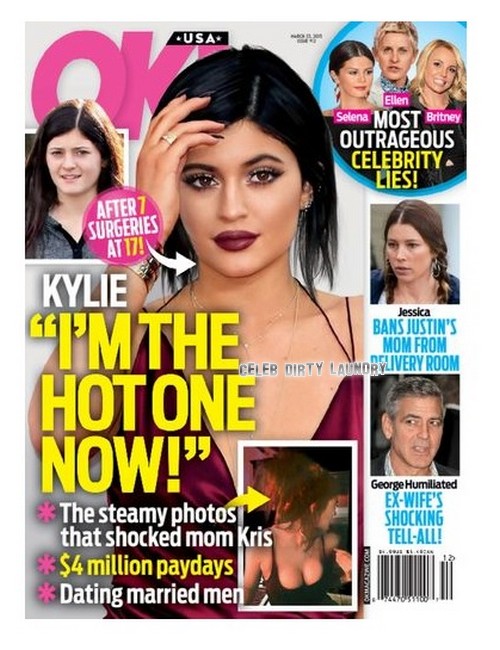 Kylie Jenner is “The Hot One Now” according to a report that itemizes all of her plastic surgery procedures. Kylie Jenner, the youngest member of the Keeping Up With The Kardashians family, has shocked the world over the last few months with her shocking transformations. Every time Kylie Jenner is photographed she seems to have a bigger butt, bigger lips, or bigger boobs. At just 17 years old, Kylie’s obvious plastic surgery procedures have become a pretty controversial topic on the internet – although Kris Jenner maintains that her teen daughter’s new look is completely natural.

The March 23rd cover of OK! Magazine features a recent photo of Kylie Jenner, and a comparison shot of what she used to look like just last year. The Keeping Up With The Kardashian star looks like a completely different person! OK! Magazine’s headline rages, “Kylie: I’m The Hot One Now,” and goes on to tease their inside story on the sultry teen’s rapid transformation in to an underage sexpot. The cover reveals that Kylie Jenner has had seven plastic surgery procedures to date – and she is not even a legal adult yet. OK! also alleges that Kylie Jenner’s new look is raking in million dollar paydays for her, and she has been dating married men!

At this point it really is laughable that Kylie Jenner and her family keep arguing that the teen has not had any plastic surgery. Her lips, boobs, and butt have literally quadrupled in size over the last 12 months – even professional make-up artists and Photoshop geniuses couldn’t work that kind of magic. As far as the tabloid’s allegations about Kylie dating married “men” – her relationship with Tyga has been the talk of the internet for months now, so yes she is dating at least one married man. Did we really expect anything different from the youngest of the Kardashian clan though? She grew up on a reality TV show, and has been following in Kim Kardashian and Khloe Kardashian’s footsteps, combine that with being raised by the wretched Kris Jenner – and Kylie is right on track.