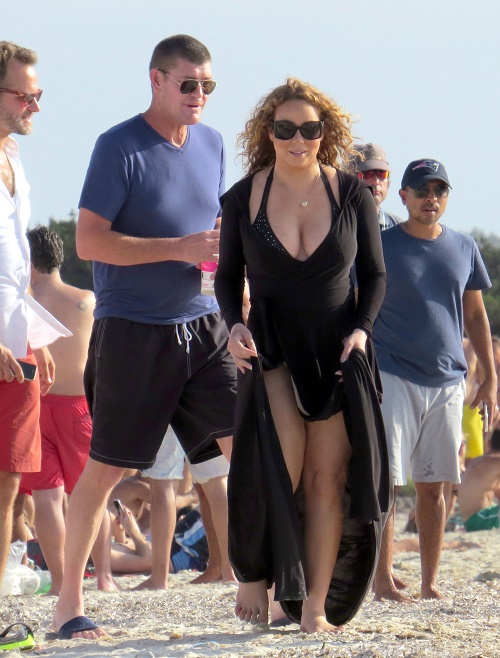 Is Mariah Carey pregnant with her new boyfriend James Packer’s baby? It looks like Mariah might be pulling a Kim Kardashian and having another man’s baby while she is still trying to divorce her previous husband Nick Cannon. Mariah and James Packer have been dating for a few months now – and their relationship is reportedly moving way too fast. Mariah is infatuated with her new billionaire boyfriend, and her friends and family are scared that as soon as her divorce from Cannon is final Mariah will elope with him.

There’s no news yet on Mariah and Packer’s wedding plans, but her pals were right, she is definitely moving WAY too fast – and it looks like she is pregnant! According to a new report from Daily Mail, Mariah Carey is pregnant with her third baby. Her first two babies are of course twins Monroe and Moroccan (with Nick Cannon). The Daily Mail cited a source from the Australian tabloid New Idea; the insider gushed, “Mariah found out the baby news recently and they’re overjoyed at the prospect of being parents.”

Mariah Carey has been rumored to be trying to move to Australia to take up residence there with her new boyfriend James Packer, and apparently their unborn baby. But there is a slight problem with Carey trying to relocate to another continent – her twins’ father, Nick Cannon, who is trying to get joint custody of the kids, is NOT having it. If Mariah Carey is indeed pregnant with baby number three at the age of 45 years old, it will be interesting to see how the newborn will affect her divorce, career, and alleged mental health issues. Between Mariah and James – they already have a total of five kids from previous relationships.

Do you guys believe that Mariah Carey is pregnant? How will Nick Cannon react? Are she and James Packer in it for the long haul, or will she be raising the baby alone? Let us know what you think in the comments below!