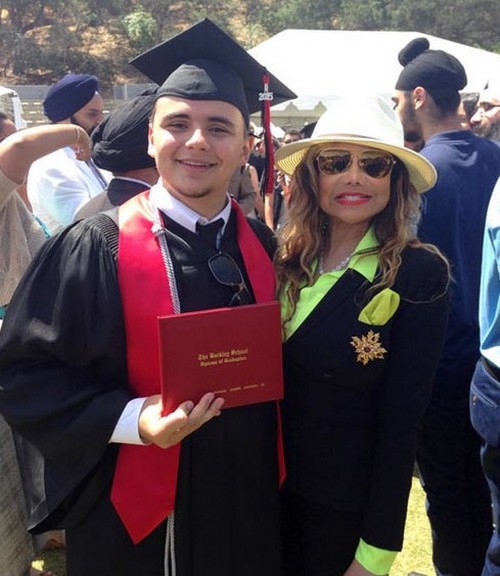 Prince Jackson, son of Michael Jackson, is officially a high school graduate. At least one of the Jackson family members has a good head on their shoulders and is working to make something out of their life. Prince Jackson, the oldest of Michael Jackson’s children, graduated on Saturday, May 30, from the highly exclusive Buckley School, which is located in the San Fernando Valley. Prince did not just graduate high school though, he did so with an honor distinction. Prince has clearly worked hard on being a great student and maintaining a high GPA.

A photo of La Toya Jackson and Prince at the ceremonies is above and TMZ sources say that when Prince’s name was announced, La Toya, Katherine, and Paris Jackson all stood up, screamed, whistled, and cheered for the graduate. Prince looked happy as he walked across he stage and received the diploma that he worked so hard for. In the photo, Prince is all smiles, and you can tell this event meant a lot to him.

As of now, we are not sure what is next for Prince Jackson, but with a last name like that, and a good head on his shoulders, it should not be hard for Prince to get into whatever college he wants to attend, or, even pursue a career in the entertainment industry. Congratulations to Prince Jackson on his most recent accomplishment!

What do you think Prince should do next? Is college in his future, or will he try his best at the entertainment industry? Let us know in the comments below.