The Young and the Restless Spoilers: Jack and Marco Attempted Murders by Victor – Peter Bergman, Most Assaulted Man in Bed? 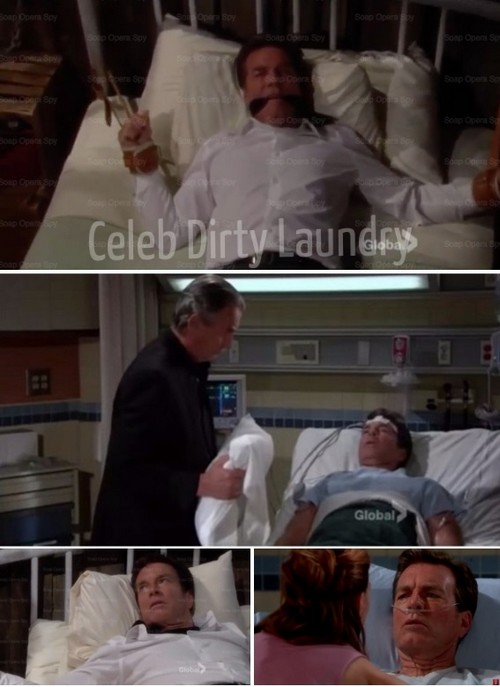 The Young and the Restless spoilers address the Jack and Marco story and the absurdity Y&R fans have faced and can expect more of as the storyline resolves itself. The wheels on the bus go round and round but in this case the bus is The Young and the Restless’s hot mess express. Peter Bergman has seen a lot of beds this past year but not how you would think.

CDL thinks Peter Bergman is doing an extraordinary job with the material TPTB at Y&R have given him to work with – his acting is fantastic, he is very professional and focused. If we counted how many days his characters have been in bed over the past few months, the bed days might outweigh the upright days. Starting with The Underground roof collapse in which Jack [Peter Bergman] was trapped under rubble and Victor [Eric Braeden] saved him. They both ended up in the hospital and ironically shared the same hospital room. But wait it gets better, Victor then grabs a pillow while Jack is sleeping and when Jack wakes up Victor is holding a pillow above him and Jack yells ‘What are you doing” – Victor then benignly fluffs the pillow and says just getting you a pillow – does this sound familiar?

It should because on the July 2 episode of Y&R Jack is in the hospital AGAIN this time in a coma and the last scene is The Moustache in his room holding a pillow. The July 3 previews show Phyllis walking in as Victor holds the pillow standing above Jack with Jack moaning in his semi-comatose state – Phyllis [Gina Tognoni] walks in and yells “STAY AWAY FROM MY HUSBAND!”

Next bed debacle recalls when Jack is kidnapped and held captive on a remote island by crazy Kelly [Cady Mc Clain]. This scene also entails a bed as poor Jack is handcuffed to this bed for it seems a soap opera eternity. Fast forward from his “Misery” scenes with Kelly to the next Bergman Bed scene.

Marco gets in a car accident with younger son Kyle [Lachlan Buchanan] and ends up yet again in a hospital bed with a concussion! Poor Bergman has had more concussions than a UFC middleweight! We see Phyllis by his side once again willing him to live but lets fast forward to this past week of Y&R when Phyllis is yet again next to Jack willing him to live. Hmm, do we see a pattern here? Are the Y&R writers under the fearless direction of Jill Farren Phelps and Chuck Pratt Jr. so tired that this is all they have to feed their viewers, regurgitated hospital and hostage bed scenes? Let’s keep moving…

Next we see Victor YET AGAIN sneaking in to Marco’s hospital room getting ready to shoot him up with a deadly syringe when Gabe [Justin Hartley] yells “What are you doing”… is this deja vu for all of you? As reported earlier, in the July 2 episode Victor is holding the pillow over Jack (who he thinks is Marco) as Phyllis walks in – okay so what have we gathered? Victor is always a would-be killer because people keep walking in on him so nobody dies! Poor Vic must be the most frustrated murderer in TV history!

Fast forward to the present time Jack is YET AGAIN in a hospital bed this time in a coma but again Phyllis is sitting by his side talking to him, willing him to live and of course The Moustache visits him alone and yet again ends up with a pillow in his hands alone with Jack/Marco.

Have we been watching the movie Ground Hog Day rather than The Young and the Restless? We have to give Peter Bergman huge praise for his EXCELLENT acting playing the duo roles of Jack Abbott and Marco Anicelli. If it wasn’t for Bergman’s interesting depiction of Marco Anicelli the viewers may have gotten restless already… correction, MORE restless. The Young and the Restless seems to be living up to it’s name because we are all “Restless” and of course all Young at heart.

It looks like the Doppelganger story is finally coming to an end with Kevin [Gregg Rikaart] the super sleuth man/boy cracking down on the double Jacks running around. We don’t know about you but we think we just may miss watching Peter Bergman play a bad guy once Marco meets his end. KUDOS to you Peter Bergman for keeping us entertained on the Y&R hot mess express!

Stay tuned to Y&R as the Jack/Marco storyline unravels further. What do you think CDL’ers, will you miss Marco Anicelli? Will you miss Bergman in bed being smothered or otherwise murdered? Please leave your thoughts and comments in the comment section below.