Angelina Jolie’s New Rules For Brad Pitt: Actor Can Only See Children In Supervised Visits With A Therapist 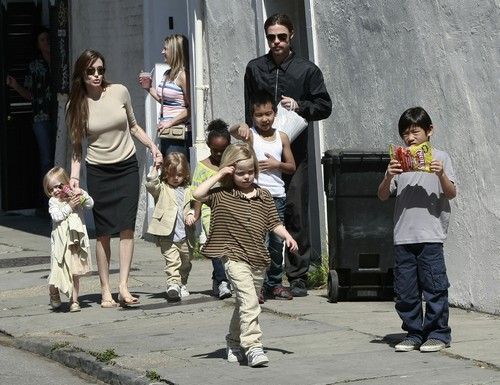 Angelina Jolie is setting new rules for Brad Pitt, and that includes supervised visits with the couple’s six children with a family therapist. Brad finally saw his kids for the first time after Angelina shocked the celebrity world by announcing her divorce from the Hollywood actor.

According to the Daily Mail, Brad’s visit with his children was so emotional, that both he and his children began crying. Sources say that it was a ‘gut-wrenching’ meeting as his kids no doubt realized for the first time that their family life will never be the same as the reality of Brad Pitt and Angelina Jolie’s divorce is sinking in.

One source even said, “Brad had had tears in his eyes and tried to hold it together because he didn’t want them to get upset because he was crying. The visit was gut-wrenching: Vivienne and Zahara both started crying.”

There’s no doubt that these supervised visits have taken a toll on Brad’s mental state. For years, Angelina has praised him and his parenting skills, calling him a caring, loving father who has always put his family’s needs over his own.

The only thing that has changed is Angelina’s vindictive nature, as there’s no doubt that she would completely strip the kids away from Brad if she could. After all, Angelina herself has had only an on-again, off-again relationship with her own father Jon Voigt and doesn’t realize how she would be hurting her kids if she did keep Brad away from them.

Then again, Angelina’s main concern in life is herself, her ego and her own needs. If she loved her kids the same way she claims to, she wouldn’t be hurting them by keeping them away from their father.

She was willing to destroy the father of her children with a nasty smear campaign against him in the media until it backfired against her. That’s why she’s toned down her attacks and has completely changed her tune, showing that she’s willing to cooperate and even ‘help’ Brad, although it might be the actress who needs the real help here.

Even though rumors have stated that Brad Pitt allegedly has substance and alcohol abuse problems, recent drug tests have come back with negative results, proving that Brad isn’t the junkie Angelina is making him out to be.

What do you think, CDL readers? Don’t forget to check back with CDL for all the latest news and updates on Brangelina’s divorce right here.

“Breast cancer alone kills some 458,000 people each year, according to the World Health Organization, mainly in low- and middle-income countries. It has got to be a priority to ensure that more women can access gene testing and lifesaving preventive treatment, whatever their means and background, wherever they live.” – Angelina Jolie

TAG someone who loves Angelina! ❤️