Big Brother 18 Spoilers: Will Frank’s Too-Intense Game Play and Overt Sexism Make Him the First Veteran Evicted From BB18 House? 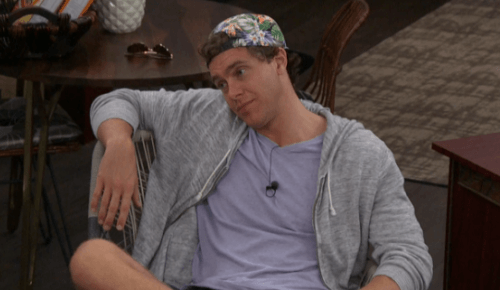 Big Brother 18 spoilers reveal that Frank Eudy may be the first veteran evicted from the BB18 house and it’s all down to two factors. First is that he’s playing the game too hard. Second is that he’s alienating the women of the house and they have the numbers to take him down.

Frank has been in an untouchable position for several weeks. First, he was in solid with Nicole as Week 1 HoH when the veteran alliance was kicking off. Then he made sure to remain close to Paulie as Week 2 HoH. This kept Frank safe and off the block right off the bat.

But Frank hasn’t been working just the vets – he’s also been making deals all over the house and this has gotten him close to Bridgette, the Week 3 HoH. They’re so close, in fact, that when she took HoH, everyone knew that meant that Frank would be de facto HoH.

However, leading up to the Week 3 HoH, some cracks became evident in Frank’s game that he still does NOT know about. When Da’Vonne was trying to orchestrate the Frank vs Tiffany set-up, her scheming got people talking about Frank.

Digging into one player always means that dirt will come up – and it did. Turns out Frank had a number of final two deals. Frank and Nicole cut a Final Two deal early on but that wasn’t his only one. Frank cut a deal with James and some others.

Turns out Frank has Final Two and Final Four deals that conflict and were all exposed. He has no idea that his game is blowing up behind his back. The 8-Pack alliance has splintered into sub-alliances at this point and the sole and only person NOT plotting against Frank seems to be Bridgette. 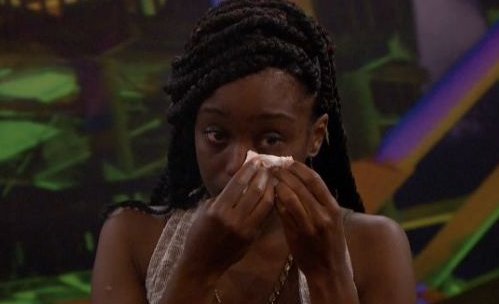 Frank may or may not really be a misogynistic tool, but it certainly looks that way from the edits. Frank has been making remarks repeatedly about Zakiyah and Da’Vonne’s rear ends and has been booty slapping many of the girls and called Day a slut.

When Paulie told Frank that Day was offended and crying, Frank did go and apologize and tells her he that he grew up in a house full of women who all slapped butts back and forth. Day pretended to accept his apology. If it was just the butt-slapping that would be one thing.

However, Frank has also made cracks about the girls cleaning the house, making his bed, their various body parts (he had a whole thing about Natalie’s nipples) and has gotten so bad the girls are all calling him a pig behind his back – plus they invented a dance to about how much they hate him. 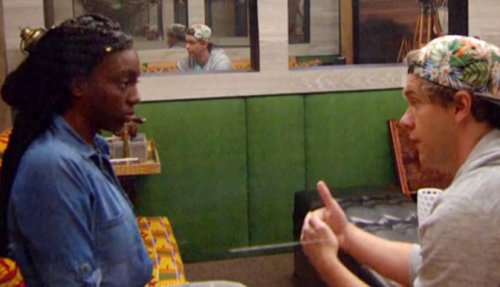 The numbers against Frank

Although it still looks like Tiffany will be the Week 3 evicted houseguest, Big Brother 18 spoilers tease that the only way Frank will stick around is if he or Bridgette can stay in control. Category 4 is Bridgette, Frank, Paulie, and Michelle.

Paulie or Michelle would have to throw the Week 4 HoH comp to try and prevent Frank from enjoying another week of immunity. Of course, that will only help if Frank can’t win it for himself. But if Category 4 wins, obviously Frank will stick around another week.

However, if he’s not HoH and Category 4 isn’t in HoH control, Frank could very well be up on the block next week based on his behavior and the girls’ dislike. As of now, Da’Vonne, Zakiyah, Nicole, Bronte, and Natalie are gunning for him (along with likely evictee Nicole).

Michelle was on Frank’s side, but he made a comment to her recently about her poor game play that has her irritated and probably ready to oust him. James is siding with Natalie and Nicole and that aligns him against Frank.

Paul will go where the wind blows to keep himself in the game, so he would definitely vote against Frank if he was nommed. Paulie sees Frank as a power player and would move against him – plus he’s got the Zakiyah showmance going and she hates Frank. 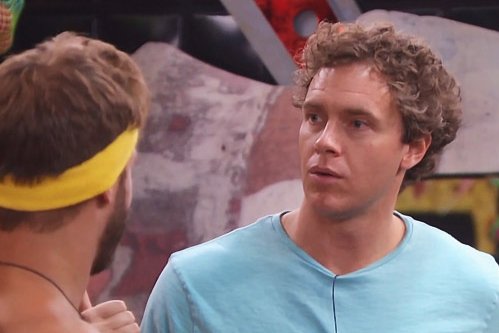 What could save Frank?

The one thing that could save Frank is Frank himself. He is his own worst enemy at this point. Frank is clueless about the forces conspiring against him and how he’s tanking his own game. However, if Frank wakes up and realizes his head is in the noose, he could change things.

Frank is a very clever player and has proven his ability to stick around. All he needs is to get a reality check written to him about his weakness in the house and he could right his game play ship. And since the BB18 houseguests are overly chatty this season, it could happen.

If Paul whispered in Frank’s ear – or someone clued in Bridgette and she went to Frank – there’s little doubt he could reverse course and save his BB18 game – Frank can go into Beast Mode but only if he knows that he needs to. He’s already won two Roadkills, after all.

However, Big Brother 18 spoilers from the LIVE feeds, at least for now, show that Frank remains in the dark. What do you think Big Brother fans? Are you sick of Frank? Do you want to see him on the chopping block and evicted or do you like him and hope he can turn his game around and save himself?

Share your comments below on the recent BB18 action. Be sure to check back with CDL often for all the latest Big Brother 18 spoilers plus LIVE recaps of every BB18 episode.