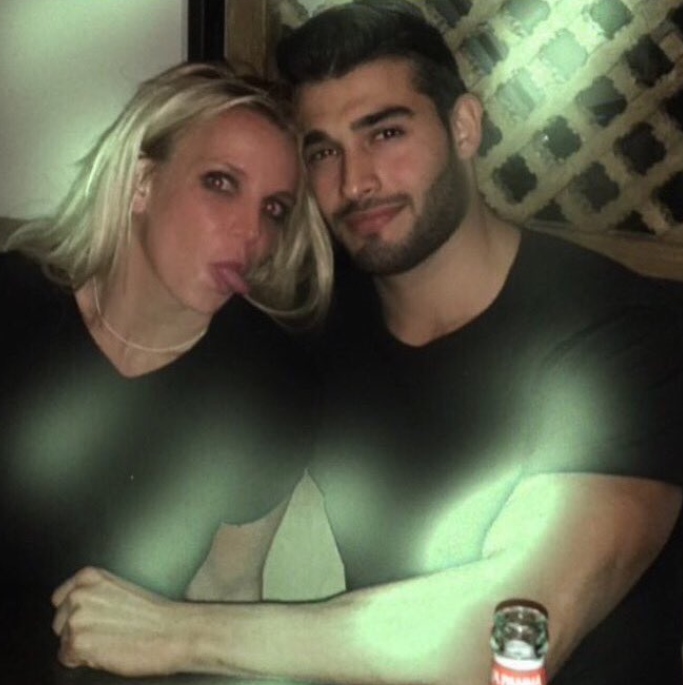 Is Britney Spears dating Sam Asghari the handsome model and personal trainer that appeared with Britney in the new ‘Slumber Party’ video? A photo of the duo enjoying dinner together has surfaced on Instagram indicating the Sam Asghari might be romancing Britney Spears.

The pic has since disappeared from Sam’s Instagram account. The hunky Persian model should know better. You can delete a photo but it’s never really gone. A sharp-eyed fan managed to get a screenshot of the pic and posted it on their Instagram. There is a clear implication that handsome Sam and Britney are hooking up!

Us Weekly reports that the photo was taken on Friday, November 26 and that the pic had sushi, shrimp and rice emojis posted along with it. Supposedly these emojis were an indication that Sam and Britney enjoyed sushi during a dinner date that evening.

In the photo Sam and Britney are wearing matching black t-shirts and the personal trainer and model has his arms around the singer. Heads together in a sweet, cuddly pose, Britney is sticking her tongue out as Sam smiles.

The model and the singer met while filming Britney’s NSFW and sexy new video for ‘Slumber Party.’ Singer Tinashe is featured in the video along with Sam Asghari. In the video Sam and Britney stalk each other through a mansion. The two finally meet – over a dinner table.

Britney Spears had a high-profile romance with ‘The Mickey Mouse Club’ co-star Justin Timberlake from 1999 until 2002. The couple broke up amid allegations that Britney cheated on Justin.

In 2004 Britney was briefly married to a childhood friend, Jason Alexander, from her hometown in Louisiana. Britney, 22 at the time, filed annulment papers 55 hours after the couple exchanged vows. Kevin Federline married Britney Spears in 2004 and the couple have two children, Seam Preston and Jayden James. Britney and Kevin divorced in 2007.

Following Britney’s divorce from Federline she remained single until 2009 when she met Jason Traywick and the couple became engaged in 2011. Jason and Britney called off the engagement and went their separate ways in 2013.

Is Sam Asghari the new man in Britney Spears life? If the ‘Slumber Party’ video is any indication, Sam and Britney definitely have chemistry on screen. Only time will tell if Britney and Sam have chemistry off screen as well.

Be confident, yet humble