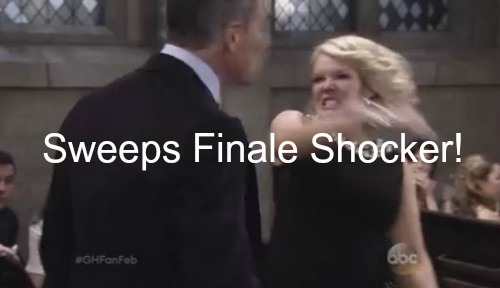 “General Hospital” (GH) spoilers video shows that February sweeps is about to hit its high point and the outcome of the gun deal and the Julexis wedding will be shocking. Dixon (Troy Ruptash) will be taken out and it should be Sonny Corinthos (Maurice Benard) that does the deed.

Sonny has been playing possum and hiding that he’s fully recovered so he could stand and stun Ava Jerome (Maura West) and take her down. But now, Sonny must acknowledge that Ava isn’t the big bad – it’s gun runner Dixon.

Will Sonny finally stand and make his big move when Ava Jerome (Maura West) sacrifices herself and tells Dixon to take her hostage in place of everyone else? Sonny can’t let evil Ava be the one who’s the hero of the day, can he?

Meanwhile at GH, spoilers show that Kiki Jerome (Hayley Erin) is in really bad shape thanks to the bullet she took because of Morgan Corinthos (Bryan Craig). Carly Corinthos (Laura Wright) is stunned that Kiki was shot saving her son.

Once the Dixon issue is resolved, Paul Hornsby (Richard Burgi) shows up to the church and Ava hears that Kiki was shot. Ava rages at Paul and attacks him. But once at the hospital, it will be Carly and Ava in a mama bear showdown.

Carly starts out feeling sorry for Ava over Kiki’s shooting, particularly when Kiki sacrificed herself to save Carly’s son. But once Ava goes on a rampage against Morgan blaming him for what happened to Kiki, Carly will stand her ground and rage at Ava for her attack on Morgan.

This will become particularly bitter when both Kiki and Morgan are fighting for their lives. Kiki will go into surgery and Morgan will contemplate suicide on the roof of the hospital in his despair over her shooting and his role in it.

Also at the hospital after the church ordeal, is Nathan West (Ryan Paevey) and Maxie Jones (Kirsten Storms). Nathan also had a close call when he was shot and Maxie realizes how much he means to her and moves past her fear of commitment – she proposes to Nathan at his GH bedside.

GH spoilers video shows that Lulu Spencer (Emme Rylan) will be saved from the murky depths of Port Charles harbor by Dante Falconeri (Dominic Zamprogna) but may still be at risk from the time she spent in the frigid water and her near-drowning.

We’ve got an action packed few days of February sweeps left and it looks like many lives will hang in the balance, Dixon gets taken down, Sonny’s secret that he’s cured comes out, and while Ava and Carly will renew their hatred for one another, Sonny and Ava may enjoy a détente for a change.

Don’t miss a moment of the hot GH action and come back to CDL every day for more “General Hospital” spoilers and news.

There’s no such thing as too much drama. Only on #GH. #GHFanFeb