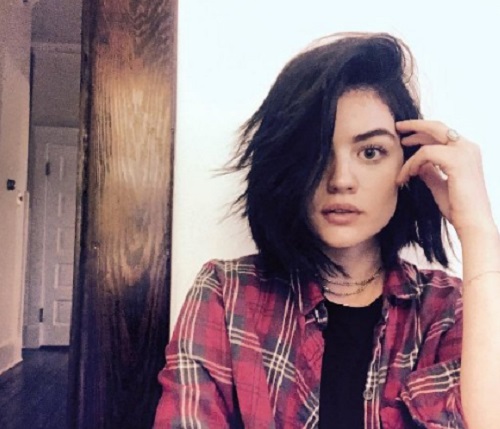 Lucy Hale account has been hacked and it has the Pretty Little Liars actress lashing out at the hackers who posted pics. While some celebs stay mum, Hale has responded to the embarrassing situation by issuing a lengthy public statement about her lack of privacy while telling the hackers to back off.

Hackers stole topless pics of the 27-year olds phone, making them public on the site Celeb Jihad. Hale shared that those photos were for a friend, who did not leak them. Lucy Hale is now suing the site, who has since taken the topless pictures down and replaced them with photo-shopped images of the actress.

Hale isn’t backing down however, and is not sorry or apologetic for doing what she feels like in her personal life. Hale posted a lengthy message to her fans on Twitter, outraged over the hack.

The actress is also starting her New Year’s resolution early. Her plan for 2017 – to speak the truth. “I wasn’t going to comment on something so ridiculous, but since 2017 is gonna be all about speaking my truth… I’m gonna say something. I will not apologise for living my life and having a personal life that is all mine.”

Hale was equally angry that her nude photos hit the web without immediate consequences to the hackers. “It’s truly unfortunate that being exposed in this way is allowed. Thank you for all the sweet, supportive messages I’ve been receiving. It was a much needed reminder that I’m surrounded by so much love. I appreciate you all very much.”

In 2014 Hale’s co-star Ashely Benson also fell victim to hackers who stole nude pictures from the actress’ phone and leaked them online. Benson was one of several celebs at the time to have her iCloud account hacked.

Let us know what you think about the latest Pretty Little Liars’ cast members nude pic leak in the comments, and don’t forget to check CDL for more Lucy Hale news and updates.