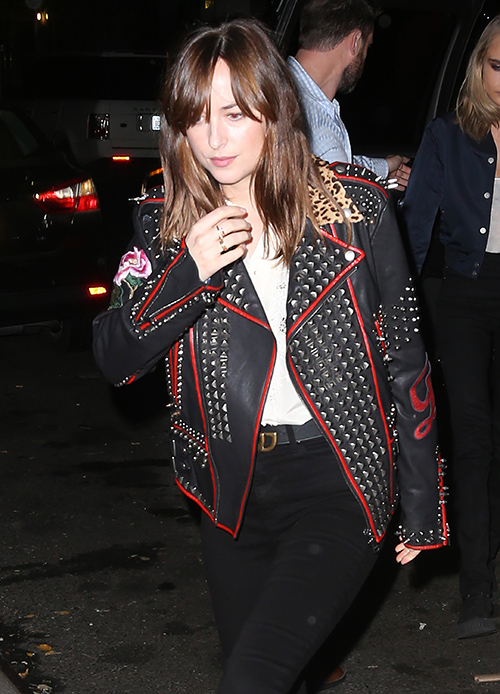 Dakota Johnson has found herself a new Hollywood squad, thanks to Taylor Swift. Apparently, the ‘Fifty Shades Darker’ star has been initiated into the singer’s exclusive squad of girlfriends, as she was spotted having dinner with her and other A-listers in New York City this past week.

According to reports, the ‘Bad Blood’ singer, who many liken to a real-life Mean Girl, took her squad to a private Kings of Leon concert and then to the Bowery Hotel for drinks with television actor Aziz Ansari. Dakota Johnson was spotted with Taylor Swift, along with her hand-selected friends of Serena Williams, Lily Donaldson, Zoe Kravitz, Lorde, and actress Sienna Miller.

Even though Dakota Johnson is considered Hollywood royalty thanks to her parents, Don Johnson and Melanie Griffith, she hasn’t been spotted hanging out with the celebrity A-list crowd until now. Since Taylor Swift has obviously given her blessing for her to hang out and be photographed by the paparazzi with her, it looks like Dakota will now be part of this all-female exclusive squad that other stars like Adele and Demi Lovato love to publicly mock and even make fun of.

But for Taylor, given her Mean Girl mentality of selecting her girlfriends, this only means that Dakota has finally proven her worth in celebrity gold. Sure, no one wants to be associated with the ‘Fifty Shades of Grey’ franchise or their stars, but Dakota has managed to nab other roles that have helped perpetuate her fame, including ‘Black Mass’ opposite Johnny Depp and ‘How to Be Single’ with Leslie Mann and Rebel Wilson.

There’s no doubt that Dakota had to go through an extensive vetting system in order to be initiated into Taylor’s squad. Obviously, she wouldn’t just choose anyone to hang out with her and apparently Dakota has done enough for herself and her career to make the cut.

After all, Taylor Swift is so obsessed with her public image, being the manipulative media mastermind that she is, that she is very selective with her friends. It’s no wonder that celebs such as Demi Lovato loathe Taylor’s squad, as the outspoken singer wouldn’t be able to hold back with her obvious disdain Taylor treats her friends.

Tell us CDL readers, what do you think? Drop us a line with your comments below and don’t forget to check back with CDL for all the latest news and updates on all of your favorite celebs here!