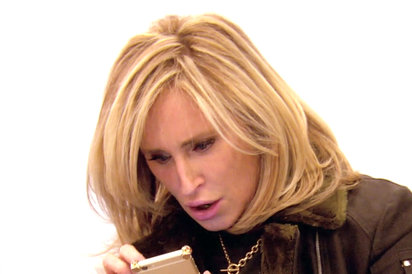 The Real Housewives of New York returns to Bravo tonight with all new Wednesday, June 22, season 8 episode 12 called, “Always the Bitch, Never the Bride,” and we have your weekly The Real Housewives of New York recap below. On tonight’s episode, it feels like old times for Ramonja as Ramona Singer and Sonja Morgan get their friendship back on track.

On the last episode, still dealing with the fallout from her Tipsy Girl venture, Sonja decided to change her partying ways. Did you watch the last episode? If you missed it, we have a full and detailed recap right here for you.

On tonight’s episode as per the Bravo synopsis, “it feels like old times for Ramonja as Ramona and Sonja get their friendship back on track and plot how Sonja can get back in good graces with Bethenny. Jules shares a secret business project with Michael, who is both surprised and impressed. Bethenny has a health scare on a shopping trip with Dorinda.  And as the ladies round up for a high society dog wedding, Dorinda shares some disappointing news about Bethenny.”

On this weeks episode of The Real Housewives of New York Carole meets up with her friend Katie to take pictures for a dog wedding. The dog wedding is to help raise awareness and money for animal rights. Carole’s dog baby is going to be one of the “bridesmaids” in the wedding.

Jules and Dorinda meet up to go shopping. They are talking about the trip to Mexico. Dorinda tells Jules “I want all of us, including Sonja, to go on this trip and have fun.” Jules asks whether it is a good idea for Sonja to go on an alcohol trip. Dorinda tells her “Sonja has agreed to stop drinking.” They continue to talk as they walk through the store. Dorinda says “We have to be careful and make sure not to create any animosity because it turns on you.” Jules says “I just wish we could all go on this trip and have a good time, please?”

Ramona goes to visit Sonja at her house. Sonja tells her “I plan to stop drinking because I really want my friends back. I want to be able to go on the trip to Mexico and have a good time.” Ramona looks concerned and tells Sonja “If you want to make it up to Bethenny you need to go to her and sincerely apologize. Tell her how sorry you are about the whole Tipsy Girl thing and just stop there.” Sonja looks worried and says “I get nervous and my brain falls out of my mouth.” Ramona laughs and says “I know that it does. So let’s practice.” She then strikes a Bethenny pose and Sonja practices apologizing to her.” Ramona says “I think Sonja is going to forget everything we worked on, but I am going to pray that she doesn’t and that she and Bethenny can make up so that we can all have a good time on this trip.”

Bethenny and Carole meet up to have lunch. Bethenny tells Carole about her encounter with LuAnn at the wine bar. She tells Carole “She didn’t realize that I wasn’t inviting her on the trip and she invited herself. I wanted to ask her if she was on crack or something.” Carole laughs and says “LuAnn is always doing that. She invites herself places that she is not invited to. Bethenny asks Carole how she feels about LuAnn going on the trip. Carole says “I am not LuAnn’s friend, and we have our issues, but I am ok with it.”

Jules and her husband Michael are talking about her latest business venture. Jules wants to develop her own line of drinks to show Michael that she can make her own money and not have to depend on him. Michael tells her “You need to have a test tasting and get feedback so you know what works and what doesn’t. Once you do that we can head straight into the factory and start production.

After her lunch with Carole Bethenny heads to Home Goods to meet up with Dorinda. Dorinda tells her “I should have been a mediator because everyone is always calling me.” Bethenny asks her “Are you any good at it?” Dorinda says “Yes I am.” Bethenny then goes on to relay her story about LuAnn inviting herself to Mexico to Dorinda. She tells her “Now I have to disinvite LuAnn on a trip that I never invited her on in the first place.” As they continue to walk through the store Bethenny begins to feel really bad. She tells Dorinda “I am not feeling so good. I have been bleeding excessively.” Dorinda looks concerned and asks her “Have you been to the Dr.?” Bethenny tells her “I have an appointment to go right after I leave here.” They continue shopping with Bethenny feeling progressively worse. Dorinda is extremely concerned and asks Bethenny “Do you want me to go with you?” Bethenny tells her “You don’t have to, but you can.” They head up to the counter to check out and Bethenny nearly faints. She leaves the purchases at the counter and tells the clerk “Hold this for my friend. We’ll be back.” They rush out to Bethenny’s car and head off to the Dr.

Carole and Jules meet up to talk. Carole tells her that her dog is going to be in a dog wedding. Carole shows her the outfit that Baby will be wearing with all of the diamonds. Jules tells her about the accident she had when she was climbing through the window and she hurt her vagina. She tells her “They had to insert a catheter and it was just recently removed,” Carole says “Wait a minute I have to sit down for this,” Both women laugh and Jules tells her “I was once told that when you have a baby not to let your husband look down there because he’ll never want to have sex with you again.”

Later that day Carole and Sonja are preparing for the dog wedding. Carole asks her “Are you going to Mexico? I just want everyone to go and have a good time.” Sonja tells her “I don’t know. I am a little nervous about seeing Bethenny tonight, but I am going to try and apologize to her.” Jules says “If she doesn’t accept it then screw it. You did all you could.”
[2016-06-22, 10:02:27 PM] Latrese Garner: Bethenny gets some disturbing news from the Dr. He tells her that she has Fybroid tumors and gives her three options. Two of which will leave her sterile. Dorinda is there to help and support her. When Bethenny tells her the news she also tells her ” I am worried about the trip to Mexico. Dorinda tells her “Don’t worry about it. I will tell everyone. Bethenny tells her “Remember when I was pregnant I had to be put on bed rest because I was bleeding excessively.” Dorinda says “It’s about time Bethenny sits down and allows someone to help her. I hope that I can be that someone.”

Everyone is impressed by the dog wedding. After the ceremony the women are sitting down talking. Ramona mentions the trip to Mexico. Dorinda tells her “There has been a change in plans.” Ramona says “What now? I can’t deal with all of these changes.” Dorinda tells them “We all need to be together.” She stops Carole and pulls her into the group. She then tells them “I was with Bethenny for the last six hours while she was at the Dr.” Jules asks her “How did that go?” Dorinda responds “Not well. I’ll let Bethenny give you all the details, but she is going to be down for at least a month. We’re not going to Mexico.” Everyone is disappointed about the trip. Ramona says “I am very disappointed in not being able to go Mexico. I was looking forward to fun in the sun, but knowing that Bethenny is having this health scare puts everything else to the side.” Sonja says “When I hear about this surgery I want to call Bethenny and check on her, but I also think that if I do that then I will look like a suck up like everyone else around me.”