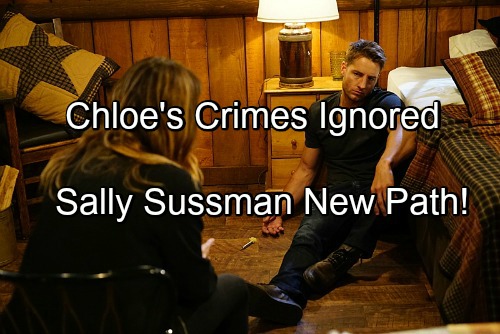 The Young and the Restless (Y&R) spoilers tease that big changes are coming up on the CBS soap. Y&R’s head writer, Sally Sussman, has plenty of storyline shifts in mind. In a recent TV Insider interview, Sussman spilled some major details about her plans for the future.

The Young and the Restless fans are already buzzing about the news that Sussman doesn’t want an Adam (Justin Hartley) recast. She’s not interested in playing out the story of Christian’s true paternity either. Since Adam is no longer in the picture, Sussman just doesn’t see the point.

Of course, that’s disappointing for the vast majority of Y&R viewers – in fact a recent CDL poll proves that almost 85% of respondents want Adam Newman back on the show. Most of us were curious about how all of that would be unpacked.

However, there’s another layer to this storyline that Sussman didn’t address. What about Chloe (Elizabeth Hendrickson) and her evil deeds? Will her plot be left in limbo, too?

When Chloe returned to The Young and the Restless, it didn’t take long for fans to get riled. She’s become a character that numerous watchers love to hate. Chloe and her crazy schemes provided a nice spark for Adam’s exit. She forced Adam to suffer and gave us some fantastic drama in the process.

Everyone was willing to put up with Chloe’s antics for one reason. We all assumed her evil secrets would come to light eventually. It’s usually soap law, right? If a character does the crime, he or she has to do the time!

Sometimes punishment includes prison, but often it simply involves backlash from loved ones. Regardless, there’s a price to be paid. We would all like to see Chelsea (Melissa Claire Egan) learn the truth about Chloe. She’s a ruthless woman has been masquerading as a caring bestie.

Chloe’s two-faced behavior has been despicable. She teamed up with Victor (Eric Braeden) to frame Adam for murder. Later, Chloe withheld the evidence that could’ve freed Adam immediately. It’s Chloe’s fault that Adam was locked up long enough to attack a guard.

Next, Chloe shot Adam with a tranquilizer dart and may or may not have been involved with the explosion. Before Sussman’s interview, we would’ve guessed there was more to the story. If everything is left as is for now, then we might as well blame Chloe for Adam’s death. There may not be anything to prove otherwise for years.

Sussman didn’t mention Chloe’s fate and we have to wonder if she’ll ever truly pay. Will she just get away with all her heinous offenses? Where’s the fun in that?! Chelsea needs to know that Chloe is responsible for her problems. An epic catfight was expected.

We can’t forget that Chloe has other secrets waiting to be uncovered. She’s hiding Bella’s (Cali May Kinder) paternity, but it looks like it’ll be a while before the revelation. In other words, some bombshells will never come and others are going to be a waiting game.

What do you think will happen to Chloe? Will she get a clean slate that she doesn’t deserve? We’ll give you updates as details emerge. Stay tuned and don’t forget to check CDL often for the latest Young and the Restless spoilers, updates and news.