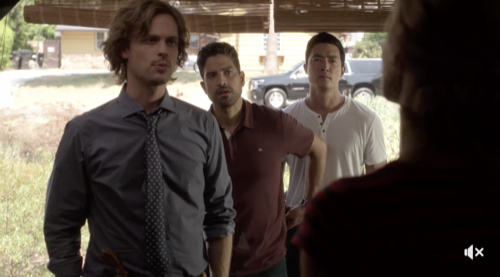 Tonight on CBS their hit drama Criminal Minds returns with an all-new Wednesday, October 25, 2017, episode, called “Lucky Strikes,” and we have your weekly Criminal Minds recap below. On tonight’s Criminal Minds episode season 13 episode 5 as per the CBS synopsis, “Morgan lends emotional support to Garcia when she experiences anxiety over a case that is personal to her from her past.”

A group of kids found a body at by an abandoned truck stop on tonight’s all-new episode, however, there was something about the case that reminded the BAU of a person they once put away.

The team had studied the recent photos of what happened to Rebecca Strong and how her body was positioned. But it eerily reminded them of Floyd Feylinn Ferell. Ferell was a cannibal that would hunt high to low risk targets though he had a specific ritual that seemed to have been used on Rebecca. Rebecca was a sex trade worker and therefore she was considered to be a high-risk target. Much like the women Ferell used to prey upon in the beginning of his “career” before he started going after women with better chances of survival. So right away that had set the case apart from Ferell’s only that had been the one exception.

Ferell hadn’t just eaten women. He had also served pieces of his latest victim to his next and that was still true in Rebecca’s case. There had been pieces of a human finger found in her stomach contents and it hadn’t been her own. But another thing that had been too similar for anyone to discount had been the way the body had been posted. The victim had had both fingers and legs removed yet had been laid out with satanic rituals that were the exact copy of Ferell’s method. So there were only two options about why this case was similar – either there was a copycat or Ferell was killing again.

But the problem with that last option had been the fact Ferell had been committed when he was finally caught. The judge had said that he wasn’t fit to stand trial and so Ferell had been removed to the Hazelwood Psychiatric Hospital, but unbeknownst to either the BAU or the FBI, Ferell had been given leave to make home visits and that meat he’s been going outside for weeks without any officials knowing. So the team had been upset by then when they landed and were filled in on the details. And they had tried talking to the hospital about how Ferell was a risk to others except the hospital didn’t want to believe them.

The hospital administrator said that Ferell had been a model patient and that he hadn’t broken the rules during his supervised visits to his sister. But Ferell’s lawyer went even further than that. She later met up with the BAU because she thought she had a case of getting the charges against Ferell dropped. She said the killings happened while he was being monitored with an ankle bracelet and that her client had stated over the years that he hadn’t killed those women. Ferell said that his friend was the one that hurt the victims and so his lawyer was making a case in which she said Ferell was under the thrall of someone else.

This “friend” had done the kidnapping, killing, and the maiming, however, the team had found Ferell with a woman in his trunk in several years ago and so he wasn’t as innocent as he claimed. He still had had enough reasoning to hold a woman hostage and the satanic shrine in his home hadn’t been fabricated. But as the team continued to investigate what happened to Rebecca Strong, they came across another victim. The second victim had been buried quite sloppily and there had been signs of hesitation in the bite marks on her legs. So that proved there was a second killer these last couple of weeks.

Only that didn’t clear Ferell. Ferell had been more experienced and that’s why the killings from ten years ago didn’t look what was happening with the latest victims. But the woman they identified as being the first kill of this new Unsub had had a girlfriend Johanna who could only think of one person that had made Ivonne feel uncomfortable. She said Ivonne had hated being around her brother Marcus because he unnerved her though she didn’t think her brother had had anything to do with what happened. She said Marcus had some trouble in the past and that he was different now. Just not as different as Johanna thought…

An agent remembered seeing Marcus at a meeting Ferell was taking and it hadn’t him until he saw the picture, but he remembered seeing a paper bag by Marcus during the and that Ferell had picked it up. But Garcia who was supposed to be helping her friends had had a hard time with Ferell’s case. She had been investigating it several years ago when a dirty cop got close to her and shot her before she could find out what he had been up to. So Garcia had been struggling and she would have continued to do so when Agent Morgan came back. He had a special relationship with Garcia and was able to help her deal with some of her PTSD. And so Garcia did return to this case in the end.

Garcia had helped the team track down Marcus and they found Marcus with Lee Ann Kelton. Kelton’s daughter had been murdered by Ferell years ago and she had gone to yell at him when she found out that he was walking around. But Kelton had yelled at Ferell with Marcus in the room and so Marcus had kidnapped her because she disrespected his mentor. So the team was able to get Kelton away from Marcus yet they had been forced to kill Marcus in the process and he had been the only one that could definitely prove Ferell had played a part in both cases – the one from ten years ago and the one he was involved in.

So the hospital board had later voted to free Ferell because they deemed of sound mind and he had technically been free when the BAU arrested him again. They had done an autopsy on Marcus Manning’s body and they found five of Rebecca’s fingers in his stomach. But they knew that they would find the remaining five in Ferell’s and so they hit with a subpoena because they wanted to take an X-ray of his digestive tract, however, Ferell had tried to run after that happened and so that had been enough for them to arrest for the murders ten years ago as well as an accomplice for everything he knew Marcus had been doing.