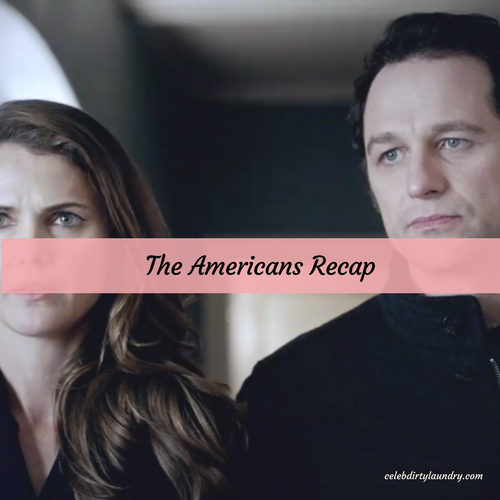 Tonight on FX The Americans airs with an all new Tuesday, April 25, 2017, episode and we have your The Americans recap below.  On tonight’s The Americans season 5 episode 8 called, “Immersion” as per the FX synopsis, “A secret brings Elizabeth (Keri Russell) and Paige together. Back in Moscow, Oleg’s own secrets put him under KGB suspicion and a new twist in the Morozov operation creates an opportunity that changes everything.”

Tonight’s episode of The Americans kicks off with Philip returning home from saying goodbye to Gabriel, he and Elizabeth are still rattled about their long time handler heading back to the Soviet Union. Philip reveals to Elizabeth that Gabriel is worried about Paige, he warned them not to get her involved in the spy business. Elizabeth doesn’t seem as affected by Gabriel’s thoughts on their daughter as Philip is.

The next day after school Henry has two of his friends over to play video games with him. Elizabeth, Philip, and Stan watch from the kitchen. They’re convinced that Henry has a crush on the girl he invited over. Stan and the Jennings’ compare notes about Stan’s son and Paige’s break-up.

Philip changes the subject and quizzes Stan about his new girlfriend Renee. Philip is convinced that Renee is a spy sent from the center, just like him and Elizabeth.

In the Soviet Union, Oleg is on his way out when he is cornered by three men in suits. Apparently some “issues” have come up and they want to search his father’s house. Oleg escorts the men upstairs and gives them permission to search his bedroom – his father doesn’t look impressed. Naturally, his mother is worried because she knows that the CIA was trying to contact him. They tear apart Oleg’s room, and even pull up the rug and take the piano apart.

While they are searching his room, Oleg heads to the kitchen to comfort his mom. The men leave as quickly as they arrived, and they apologize to Oleg’s father for the intrusion. After they leave, Oleg’s father demands to know what is going on, Oleg insists that it was nothing and they were just doing their job.

Elizabeth puts on her disguise and heads over to Alexei’s house to check on his wife. She’s working for the US government, teaching American’s Russian. She mentions that one of her students is a “Big sex guy and women like him,” which seems to perk Elizabeth’s interest.

Later that night Philip and Elizabeth head to the safe house – Gabriel is gone, and Claudia is waiting for them, she’ll be handling all of their cases now. She tells them to keep it up with Kemp and Stobert while they are waiting for the analysis from the grain samples. Their meeting is awkward to say the least, Claudia wants them to stay for tea, but they refuse. Philip makes it clear that they know what they are doing, and they don’t need to spend any unnecessary time with Claudia.

When they get home, Elizabeth announces that she is going to cancel her next trip to see Stobert. Even though that’s the exact opposite of what Claudia told them to do. Things have been awkward since they caught Stobert cheating on Elizabeth and it was obvious she had caught feelings for him. Philip decides he will cancel his trip to see Deidre Kemp too. Stan and his partner meet up with the Russian woman that they are trying to recruit. They talk numbers – the government is willing to pay her $500 a month. She’s thrilled, it sounds like a ton of money to her. She plans to save half of it for her son’s education and the other half to buy a house. But, she drives a hard bargain – she has problems with her teeth and wants help with a dentist. Stan agrees that they can take care of her dental bills too. They prep her on what to tell her co-workers about where she was when she returns to work.

Stan and his partner meet up with the Russian woman that they are trying to recruit. They talk numbers – the government is willing to pay her $500 a month. She’s thrilled, it sounds like a ton of money to her. She plans to save half of it for her son’s education and the other half to buy a house. But, she drives a hard bargain – she has problems with her teeth and wants help with a dentist. Stan agrees that they can take care of her dental bills too. They prep her on what to tell her co-workers about where she was when she returns to work.

Elizabeth heads to a payphone and calls Stobert – he’s thrilled to head from her and not too happy that she cancels their visit next week. Elizabeth lies and says she won’t be back to town for another few weeks. Philip heads to a different payphone and calls Deidre and cancels. Deidre could care less, she actually dumps him over the phone and says she doesn’t see a future with him anyway.
Later Elizabeth and Paige have another self-defense lesson in the garage. Paige hasn’t been doing well since the incident in the parking lot weeks ago. And, she’s growing impatient, she wants to know when she will be able to defend herself already. Elizabeth and Paige share a moment, Elizabeth confesses that she was raped when she was 18, and she used to be as scared as Paige is now.

Oleg heads to work in the morning, his boss quizzes him about his house being searched. Oleg covers up and says that he accessed a file about his mother that he shouldn’t have, and that’s what set off the red flags.

Philip is getting ready for bed and he finds Elizabeth in their bedroom in her nightgown doing Tai Chi, Stobert taught her how to do it. Philip confesses that Deidre broke up with him because he wasn’t aggressive enough with her. Elizabeth lectures him about not really trying to seal the deal and tanking it on purpose. Elizabeth blames it on his trips to EST, they are teaching him to be too nice. Elizabeth scoffs that he just got kicked out of bed by a 45 year old logistics manager, he’s obviously not doing something right.

The next day Philip puts on his disguise and tails Alexei’s wife to her new job where she is teaching Americans to speak Russian. Elizabeth follows in a second car. She told Elizabeth that she was going to one of her students’ houses – but something seems to be off. Elizabeth gets out of the car to snap some photos – it looks like Alexei’s wife if having an affair, she takes a picture of them kissing on the front porch.

Elizabeth meets up with Claudia and fills her in on the affair. They share small chat, Claudia reveals that she went home for a while to spend time with her daughter and grandchildren. She’s upset because the kids didn’t remember her. Claudia questions Elizabeth about Paige. It sounds like Elizabeth is leaning towards getting Paige involved with the Center.

Meanwhile, Philip heads to a payphone and calls Deidre again. He leaves a message on her machine and tries to salvage their phony relationship. He tells her on the machine that he’s married, she suddenly picks up the phone. Apparently he’s much more attractive if he’s cheating on his wife.

The next day Elizabeth and Philip meet up with Tuan to check in on him. They fill him in on the affair and how they plan to use it to get her to go back home to Moscow. Tuan volunteers to help the situation by bullying her son Pasha so she will want to move him back home. Before they leave, Tuan tells them that they need to be at their fake house more.

Elizabeth heads home and Paige is lying on the couch watching TV. She convinces Paige to go for a walk with her, and she chats with her about her break-up with Matthew. Paige is still intrigued by her mom’s rape story, she asks her more questions about what happened. Elizabeth gives her a speech about time healing all wounds, and how things will get easier as the days go by. The conversation turns and they discuss Elizabeth’s job, she confesses to Paige that if she wasn’t a spy, she would want to be a doctor in a third world country so that she could still make a difference and help people.