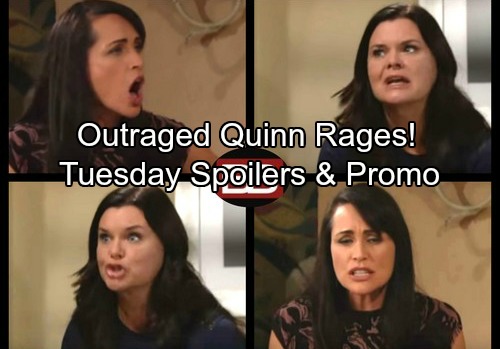 The Bold and the Beautiful (B&B) spoilers for Tuesday, October 17, tease that Mateo (Francisco San Martin) will take advantage of Quinn’s (Rena Sofer) misery. He’ll let her rant about the situation with Katie (Heather Tom) before offering some sympathy. Quinn will shout that she had to drag that woman off her son. She’ll feel like Katie had no business starting a romance with Wyatt (Darin Brooks).

However, Eric’s (John McCook) actions really pushed Quinn over the edge. She’ll fume over the fact that her husband knew and kept her out of the loop. Mateo will agree that Wyatt and Eric should’ve shown Quinn more respect. He’ll say just about anything to make Quinn feel supported. The Bold and the Beautiful spoilers hint that Mateo and Quinn will grow closer thanks to his sly move.

Meanwhile, Eric will try to get everything under control at Katie’s place. She’ll still be fuming over Quinn’s decision to burst in her bedroom and go berserk. Eric will understand where Katie’s coming from, but he’ll hope that she can calm down eventually. B&B spoilers state that Eric will do his best to smooth things over, especially since Wyatt is going to be stuck in the middle of all this.

Elsewhere, Sheila (Kimberlin Brown) will attempt to add a new member to her team. She’ll reach out to Pam (Alley Mills) as she works to recruit her for a plot. Since Charlie (Dick Christie) has been pretty irate lately, this strategy could be helpful. Sheila could use Pam to influence Charlie and get them both on her side.

The Bold and the Beautiful spoilers say Sheila will butter Pam up, but will she make any progress? Pam needs to be careful if she becomes part of Sheila’s dangerous game! There are several schemes in play and at least one of them is about to end in disaster.

It sounds like big trouble is brewing. Will everyone make it out of this alive? Could Sheila resort to murder if her plans go awry? We’ll give you updates as other B&B news comes in. Stay tuned to the CBS soap and don’t forget to check CDL often for the latest Bold and the Beautiful spoilers, updates and news.