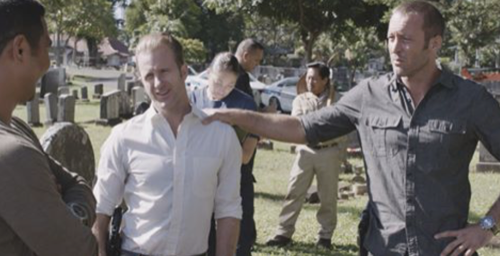 Tonight on CBS Hawaii Five-0 air with an all-new Friday, January 19, 2018, episode and we have your Hawaii Five-0 recap below.  On tonight’s Hawaii Five-0 season 8 episode 14 “Na keiki a Kalaihaohia (The Children of Kalaihaohia)” as per the CBS synopsis, “When the corpse of a diamond smuggler is stolen from a graveyard, Five-0 tracks down his partner, Voss, who will stop at nothing to retrieve their latest batch of contraband. Also, Adam recruits a new confidential informant, Jessie Nomura; Tani gets a devastating call; and McGarrett tasks Pua to find his and Danny’s stolen tools.”

A body was stolen from Roseland Cemetery on tonight’s all-new episode of “Hawaii Five-0” and whoever was responsible had also gone to great lengths to cover up their crime.

The thief had also killed the night guard on duty and had buried it in place of the body they stole. But a freshly dug grave was always got be suspicious and so the groundskeeper dug it up just to find his colleague at the bottom. The guard had unfortunately been shot before he was buried alive and so the killer wanted to make sure he was dead. He could have easily have left a badly injured man in a grave he can’t lift himself out of. So the fact the man had still been killed had proven the graverobber hadn’t wanted anyone to know that they were there and so Five-0 brought in to investigate the matter.

The first one of them that had shown up had been Junior and Junior had gotten the information for the others. But what Junior couldn’t figure out and what they all needed to investigate was why that grave? The grave of Travis Hinkley had been a new. The man had died recently and at a young age, but someone had written that he was a kind soul on his grave and so McGarrett asked Junior to find out what else he could on Hinkley. Hinkley must have been chosen for a reason and therefore Junior tried out to find what the reason was. So he looked into whether or not Hinkley had family and how he died. And nothing on Hinkley seemed suspicious.

Hinkley had no family. He was alone in the world and had reportedly died from malaria. A disease which caught on his recent trip to West Africa. But neither of them explained why someone would dig up Hinkley and so Lou had a suggestion. He suggested that maybe there was someone that wasn’t quite ready to say goodbye to Hinkley and they dug him up to still feel his presence. Like what Norman Bates did to his mother! So the others hadn’t really wanted to believe that theory though they had to investigate it and McGarrett chose to investigate a different angle with Danny. The guys had gone to Jerry to see if he had any theories on why someone would dig up a body.

Unfortunately, Jerry had plenty of theories. He said they could have dug up Hinkley to use his skull in a Haitian Zombie powder or he could have been dug up for a wedding in the afterlife with someone else that had recently died and his last theory had been a possible healing powder. Healing powders have been known to use the recent remains of a dead person and so the guys decided to investigate that angle. They knew there were a few shamans on the island that liked to color outside the box and they actually bought one of them in for questioning. And they got nowhere because he didn’t take the body.

He said he had no reason to take it and the body eventually showed up on its own. It was found in an abandoned truck and someone had clearly opened up the body because his intestines were all over the floor. But the team wondered what must have been in his system. Hinkley had smuggled something into the country and that why’s he was dug. He must have had a partner and the partner hadn’t expected Hinkley to die from malaria. So they looked into what he was smuggling and their best bet was diamonds. The correct term is blood diamonds because they were coming out of Africa at the cost of so many lives and as it happens that led them to Hinkley’s partner.

His partner was Neil Voss. Voss got into some trouble for doing the same thing as Hinkley and so he must have ordered Hinkley to do it in order to lower the risk. But the team had looked for Voss and, while they couldn’t find him, they knew that he hadn’t skipped town when he had the chance. So Dr. Cunha ended up explaining why Voss hadn’t run. He hadn’t run because he didn’t have the diamonds. There had been stitches on Hinkley’s intestines that showed whoever prepared his body for burial had found the diamonds and then tried to cover up the fact he had found the diamonds. And so the team looked for the mortician.

The mortician had luckily still been alive when they found him and so they Voss had just tied him up, but Rice said that Voss was going to house where his wife was and the team waited for Voss to leave before making their move. But Voss wasn’t going to surrender willing and so they had been forced to shoot him So as they were checking him over, they found the diamonds. They had been in Voss’s stomach because that’s how he was going to smuggle them out of Hawaii and so being shot in the stomach hadn’t been his good fortune. And while they had been at the scene, Tani had gotten a call from Adam.

Adam had given her brother Koa a job as a favor and afterward, he had come across Koa after the young man overdose in one of the port-a-potties. But Adam knew better than to take Koa to a hospital because then the police would be involved and so he brought him to Cunha. Cunha helped saved Koa’s life and together with Adam, she made sure no one besides Tani found out what happened. So Tani’s friends had done her a huge favor and all she could say to Koa was that he should have died. She had promised their dad that she would look after him and, while he wasn’t a kid, he wasn’t a man either.

Tani told him that he had to go to rehab and that she couldn’t keep covering for him, but what he chooses to do next will be up to him. But Adam hadn’t just covered for Koa. He had agreed to form a task force within Five-0 that was going to be centered on finding whoever was trying to take charge of the underworld. So he recruited someone that knew his brother Michael because he needed help with looking into Hideki Tashiro. He was the one yakuza leader still standing and so Adam wanted to figure out why.