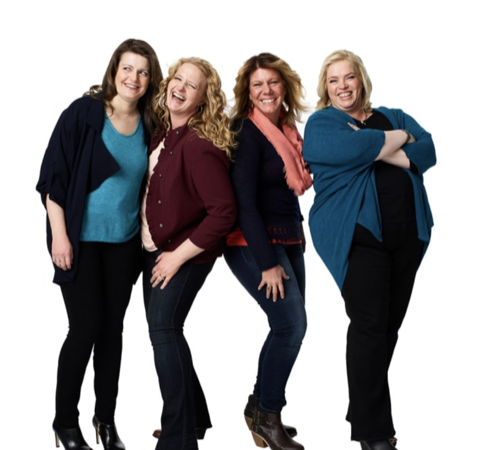 TLC’s reality show about a polygamist family Sister Wives returns tonight with an all-new Sunday, January 21, 2018, season 9 episode 3 called “I Will Survive” and we have your weekly Sister Wives recap below. On tonight’s Sister Wives season 9 episode 3 as per the TLC synopsis, “It’s Mykelto’s bridal shower, but Janelle’s terrified of performing with the Sister Wives.  Christine gets emotional as she cuts up her wedding dress to make cloth flowers for Mykelti’s bouquet.  And Maddie tells the family her big news.”

Madison and Caleb came to town to announce they were pregnant on tonight’s all-new episode on “Sister Wives”.

They had told everyone that they were coming into town because Madison was celebrating turning twenty-one and so most of them were able to make it. However, there were some that hadn’t been there when the happy couple announced their news. Meri was unfortunately out of town and had plans to be out of town from before she knew that Madison was coming for her birthday. So Meri missed the moment when the couple announced, but they immediately called her afterward to tell her she was going to be a grandma and so she was still part of that moment.

But Meri has started to become a little more independent. She was working and even buying a house outside of the family dynamic. So everyone wanted to be supportive of it and of her finding her way again though they didn’t want Meri to be too independent of the family. They worried that if she did that it would be hard for her to come back from because they have seen incidents like that. They know families were one wife doesn’t have kids or they’re out of the house and that sometimes leads to the wife moving further and further away from everyone else.

Meri was already talking about buying a house in Utah and there were some that liked that idea while others didn’t. Christine for one hadn’t the liked the sound of Utah because that was the state that drove them out. The state had threatened to charge them for their polygamous lifestyle and they had had to take their case to the federal courts just to decriminalize what came naturally to them yet the family, for the most part, had wanted to move back to Utah when it was safe. They had their church there and an entire community they missed.

So the adults have talked about moving back to Utah in the future and Christine was the only one that didn’t want to move back. She still remembered what it was like to be run off and so she wanted to stay in Las Vegas because she built a new home for herself there. It was where she felt safe and where she knew they would remain safe. Yet, no matter how much she tries to deny it, the rest of the adults knew that they were going back one day and so it was almost inevitable even if Christine liked to believe they’ll all change their minds.

Christine merely believed if it wasn’t being said then it wasn’t happening and so no one bothered talking about it anymore. They chose to instead talk about Mykelti’s wedding. The wedding was fast-approaching and the moms were all doing this lip-sync routine to perform at Mykelti’s bridal shower however this was also going to be the first time Janelle participated in something like that and she had been a little apprehensive. She was someone that didn’t like to do those things because she had been concerned about looking silly and it made her uncomfortable.

Janelle has always been uncomfortable about these things though she wanted to push ahead for Mykelti because she felt bad about pushing Mykelti’s wedding back so that it didn’t interfere with Madison and that she once said Mykelti was too young to be getting married. She hadn’t wanted anyone to be bothered by that and so she tried to throw her full support in. Janelle agreed to do the dance and everything about the dance made her uncomfortable. She had to wear a wig she thought looked too silly, she had to dance a dance she thought looked silly, and ultimately she wanted to hide in the back.

Meri, on the other hand, had gotten even less practice time than Janelle and so she wanted a set routine in which they count off numbers and all do the same thing. She thought they should perform a uniform dance and Christine wanted them all to do their own thing. Christine hadn’t wanted there to be a routine and so she got her way when they all did what came naturally to them, but the dance was the one thing that Christine got to control. She didn’t even get to plan what she was serving for the bridal shower because her daughter Aspyn took over.

Aspyn was the planner and sometimes she could be high-strung if things didn’t go her way so it was better for everyone to make sure things went her way. She got up early and got everyone to help set things up. But the one person that Aspyn kept butting heads with was Christine. Christine had to make the Mexican hot chocolate and all she had was dark semi-sweet chocolate rather than just dark chocolate. So Aspyn had freaked out at that and she had also freaked out when her mom decided to let loose for her by running around the room.

Christine had merely tried to release some of the tension and Aspyn considered to be one of those times acted crazy. Except together they got the bridal shower together and the guests all enjoyed it. They even liked the Mexican Hot Chocolate that Christine had such a hard time making and so the Hot Chocolate bar was what they loved the most. Then came the gift-giving part! Mykelti’s friends and sisters had all given her what supposed to be their favorite romance book and they had fun with it.

There was “The Taming of the Shrew” and that had been a running joke in their family because Kody once had a car named after the main character yet he got the car when he was just married to Meri and so Meri wondered if he had been calling her a shrew at the time. Another book that had been given as a gift was “Fifty Shades of Gray” and Christine blushed even talking about it. She thought that book was uninteresting when she first tried to read it and so she hadn’t actually the first one or the trilogy. And so she only read parts.

The parts she did read though were pretty out there and so she never found out what the book was about. Yet, Janelle filled her pretty quickly. She told her sister-wife that the book was about bondage and that romance was sort of there. So Christine was resolved to never read the book and she was glad that it was just a gag gift so after that then came the dance. The dance was a 70s inspired fun romp and everyone loved watching the moms make fools of themselves. And while it was different for Toni’s family who didn’t understand the tradition, they loved it.

It was perhaps the first time they had ever heard that song or see such a dance yet they loved it and afterward, there was even more gift-giving. That time it was from the relatives and so it was shocking to Christine when Toni’s entire family gave Mykelti lingerie. She hadn’t thought they were having that sort of bridal shower and the fact that it came from Toni’s mother as well had them wondered what Maria got up. So the entire bridal shower was just what Mykelti would want and she more than anyone else had enjoyed herself.

Now there were somethings in the wedding that Christine wasn’t sure about. She had approved of the piñatas for instance because there was going to be piñatas of the bride and groom that the other got to beat with a stick. So Christine hadn’t been comfortable with that. She had still gone out and gotten them because that’s what the bride and groom wanted just she hadn’t been too sure about them. And so Kody put it to her like that, everytime Toni has had something big to celebrate it had involved getting cake smashed in his face and a piñata.

Christine hadn’t been very supportive of Mykelti getting married when her daughter told her about it and so Christine had thrown in a few surprises. Like taking voice lessons because she wanted to sing the couple a song at the wedding and she had also gotten Toni a Claddagh Ring so because it was a tradition in her family and she wanted Toni to know he was part of their family. So that along with the frisbees and even the bridal bouquet – showed Christine was all in. She wanted to Mykelti and Toni to know that she supported them wholeheartedly.

So the only problem Christine had with any of it had probably been when she cut up her wedding dress to create Mykelti’s bridal bouquet because she didn’t know that she would be too attached to it when she thought of cutting it up.