General Hospital Spoilers: Is Sasha the New Sabrina – Michael’s in Familiar Territory with Love and Lies 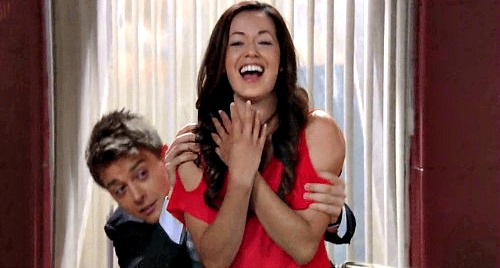 General Hospital (GH) spoilers tease that Michael Corinthos (Chad Duell) could be setting himself up for heartbreak once again. He tends to pick the wrong woman to get involved with, and this time is no different. Now that Michael’s hooked up with Sasha Gilmore (Sofia Mattsson), he’s even more smitten than before. Sasha’s also into Michael, but she’s keeping some huge secrets.

Will Sasha turn out to be Michael’s new Sabrina Santiago (Teresa Castillo)? Michael and Sabrina were a great couple until she lied to him. Sasha may find herself at a crossroads soon enough. As she falls harder for Michael, will she come clean about her deal with Valentin Cassadine (James Patrick Stuart) to cement their relationship?

To say that Michael is unlucky in love would be the understatement of the century. Michael’s love interests either leave or die; there’s no in between. General Hospital fans will recall that three of Michael’s lovers are dead. That includes Abby Haver (Andrea Bogart), who died in a freak accident, as well as Sabrina and Kiki Jerome (Hayley Erin), who were killed by serial killers.

Although he didn’t cause any of their deaths, any sane GH character would have to think twice about getting involved with Michael. Nevertheless, Michael desperately needs a new woman – someone to help raise his son, someone to possibly give him more children and someone to share his life with. Could Sasha be that person for Michael?

Sasha seems to have had a normal life until Valentin came into her orbit. Her mother had recently passed away, and Sasha didn’t have a steady job. She was working through a temp agency, so she obviously needed more cash flow. However, what if there was more to the story? Could Sasha be an unknown relative of Nina’s that Valentin is blackmailing?

It’s worth mentioning that Sasha bears a striking resemblance to Britt Westbourne (Kelly Thiebaud). Perhaps Sasha is more tangled up in drama than anyone realized! Regardless, Sasha’s deception will inevitably present a problem down the road. Michael has a massive problem with lies, and how could he not after all the falsehoods he’s been fed?

Kiki lied about her feelings for Michael’s brother, Morgan Corinthos (Bryan Craig). Sabrina lied about the child she led Michael to believe was his. Of course, Nelle Benson (Chloe Lanier) did nothing but lie from the time Michael met her. Michael doesn’t want a woman who refuses to be honest with him, so things aren’t looking good for Sasha.

Will Sasha understand how much her deception could hurt Michael? If so, will she understand it fast enough? Michael isn’t going to be happy when he finds out his new fling is lying about being Nina Reeves’ (Michelle Stafford) daughter. Once the truth comes out, will Michael be willing to forgive Sasha for her bogus claims?

Michael and Sasha have some hot chemistry, but it’s clear that trouble’s brewing. Will Sasha be Michael’s new Sabrina, the woman who grounded him and made him want to stay connected to his family? Will Sasha’s fake daughter lie ruin any chance of happiness they might’ve had instead?