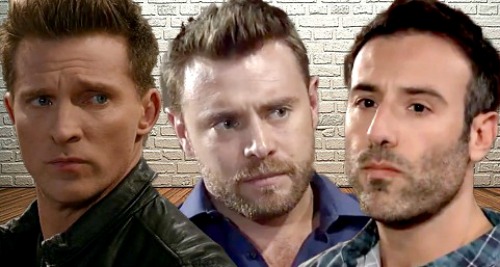 General Hospital (GH) spoilers tease that Drew Cain (Billy Miller) has some big storylines headed his way. He’s taken a backseat on GH for a while now, but it looks like he’s got some good stuff coming up. Naturally, the aftermath of Oscar Nero’s (Garren Stitt) death should bring some gripping scenes.

Before Oscar passes away, he’ll give Drew and Jason Morgan (Steve Burton) one final request. There’s been tension between these two ever since Jason returned to town and reclaimed his identity. However, Oscar will really want them to start getting along as brothers.

Is it possible for Drew and Jason to form a true bond? Never say never, especially since a dying teen will beg them to! Jason and Drew will probably never be best buds, but maybe they can inch closer to a real connection.

Regardless, Oscar’s wish could put Drew back in the Dawn of Day story. It makes sense for General Hospital to push Drew toward Jason as part of all this. After Oscar’s gone, Drew certainly won’t want to lose anymore people he cares about.

General Hospital spoilers hint that this storyline will zig when you expect it to zag, so GH fans should get some interesting twists. Everyone is counting on someone dealing with Shiloh in a violent way, which could obviously happen. Still, there might be a non-violent approach that will be tried as well.

Drew has some secrets buried in his memories, and Shiloh definitely wants those kept under wraps. Nevertheless, Coby Ryan McLaughlin thinks the friendship Drew and Shiloh used to share was real – not one of the cult leader’s manipulation tactics. In an interview with Michael Fairman, McLaughlin discussed this possibility.

“I think that Drew really did what Shiloh said that he did,” McLaughlin said. “I think Drew really saved his life, and he does really want to pay that debt back. I think therein really lies the contradiction with this guy. It makes it difficult for him to operate.”

McLaughlin added that in his mind, Shiloh is one person to Drew and a different person to everybody else. He suggested that this might be the only true relationship Shiloh has with anybody. Shiloh wants that flash drive and has no desire for Drew to remember anything, but McLaughlin argued that his character still has great respect for his old friend.

Of course, McLaughlin did admit that things are a little up in the air with this relationship due to the memory issue. If Drew eventually has the procedure done or finds another way to recall, that could obviously be a game-changer. Even so, Drew’s former bond with Shiloh could be used as a secret weapon to bring Shiloh down!

Do you think Drew will slide into the hero spot? Will he help save the day thanks to his past with Shiloh? We’ll give you updates as other GH news comes in. Stay tuned to the ABC soap and don’t forget to check CDL often for the latest General Hospital spoilers, updates and news.