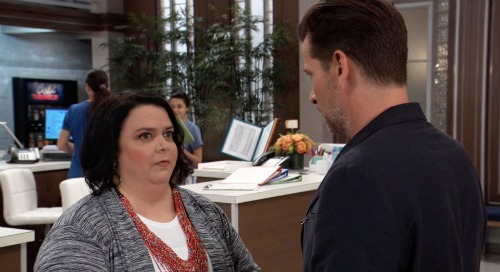 General Hospital (GH) spoilers tease that a new actress has joined the cast of the ABC soap. This is set to be a short-term role, but it’ll be an important one! Sibley Gamble (Veronica Cartwright) helped Ava Jerome (Maura West) by channeling Kiki Jerome (Hayley Erin), but Ava didn’t get the closure she needed. She wants to prove her love to Kiki and patch things up with her in the great beyond.

GH fans can expect another psychic to pitch in with that. Her name is Chelsea, and it looks like she’ll be a bit eccentric – not that we’d expect anything less from a soap psychic in Port Charles! General Hospital spoilers reveal that Jen Ray will portray this new character, who’ll advise Ava as well as offer a warning to Franco Baldwin (Roger Howarth).

On Twitter, Ray received a warm welcome to the GH family. General Hospital exec Nathan Varni sent out a tweet to let everyone know when Ray’s first episode would be. “What does Chelsea see in Franco’s future? I’m thrilled to welcome @jenrayray previously of @TheMiddle_ABC to @GeneralHospital … catch her first episode this Friday, July 26! #GH”

In addition to playing Nancy Donahue on The Middle, Ray’s also had some interesting roles on Gilmore Girls, Big Love, True Blood and more. She should be perfect as Chelsea, especially since she’s quite familiar with the show! Ray sent out a tweet of her own explaining her fondness for General Hospital and expressing gratitude for the opportunity.

Chelsea will let Franco know it’s not a good idea to drive right now, but he won’t pay attention to her words of caution. As for Ava, General Hospital spoilers say Chelsea will do her best to help Ava reconnect with her daughter. However, Ava may have to do some soul-searching and make some bold moves before Kiki will really listen.

GH should deliver some intriguing scenes thanks to Chelsea and her unique tactics. General Hospital fans won’t want to miss all the action. Do you think Ava can make amends with Kiki? We’ll give you updates as other news comes in. Stay tuned to the ABC soap and don’t forget to check CDL often for the latest General Hospital spoilers, updates and news.

I have watched GH @GeneralHospital with my Mom since I was a teenager! I cannot thank everyone in Port Charles for helping a little girl dreaming of being on her ‘story’ actually come true! And a special thank you to @nathanvarni @valentinifrank @TeschnerMark Awwwww…SO FUN!! https://t.co/FXDJc7Pjqt