General Hospital Spoilers: Sonny’s Past Catches Up with Him – A Shocking Familiar Face Shakes Things Up 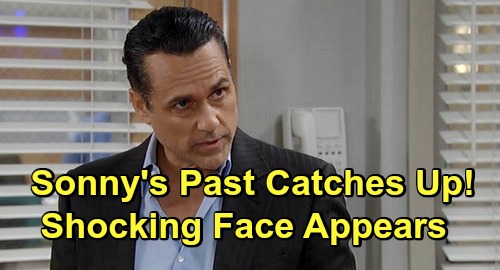 General Hospital (GH) spoilers tease that someone from Sonny Corinthos’ (Maurice Benard) past will reenter the picture. Who will it be and what will he or she want? There are some interesting options to consider here, so let’s dive in and take a look at them.

Sonny has had his share of enemies over the years. However, most of Sonny’s rivals are dead or are at least they’re supposed to be. Faith Rosco (Cynthia Preston) died years ago when John Durant was in Port Charles. Faith helped A.J. Quartermaine (Billy Warlock) kidnap Sonny’s kids at the time.

Durant died years ago as well so he shouldn’t be showing up either. However, Paul Hornsby (Richard Burgi) could always escape custody and come gunning for Sonny again.

Rick has been out of town for quite some time, but Port Charles needs a new district attorney since Margaux Dawson (Elizabeth Hendrickson) resigned. Who will be the new DA? It could be someone with ties to Sonny.

Sonny has had GH friends come and go as well. One of Sonny’s best pals was Luke Spencer (Tony Geary). Could Luke stop by Port Charles to visit family and friends? Ned Quartermaine’s (Wally Kurth) ex-wife Lois Cerullo (Rena Sofer) was a friend of Sonny’s growing up, and they remained friends for years. Could Lois arrive to catch up? Sonny would surely love having a chance to talk.

With Jasper Jacks (Ingo Rademacher) in town, could Brenda Barrett (Vanessa Marcil) come back to Port Charles? It’d be interesting see what Brenda’s opinion of Sonny and Carly Corinthos’ (Laura Wright) new baby would be. Brenda could shake things up for “CarSon” a bit.

Considering everything that’s going on in Sonny and Carly’s life at the moment, it’d be best if Sonny gets a fun blast from the past instead of a grim reminder. Sonny and Carly need to concentrate on their impending bundle of joy and ensure that Carly has a healthy pregnancy.

Nevertheless, General Hospital spoilers say some curveballs are headed their way eventually, so this visit could be a rough one. Who will show up from Sonny’s past and how will this visit affect his future? We’ll give you updates as other GH news comes in. Stay tuned to the ABC soap and don’t forget to check CDL often for the latest General Hospital spoilers, updates and news.