The Bold and the Beautiful Spoilers: Thursday, May 2 Update – Shauna Pushes Flo Toward Hope for the Future – Ridge Piles on Guilt

BY Heather Hughes on May 2, 2019 | Comments: Leave Comments
Related : Soap Opera, Spoiler, Television, The Bold and the Beautiful 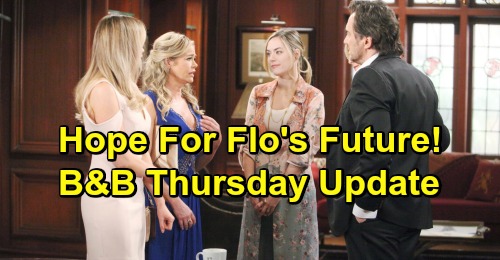 The Bold and the Beautiful (B&B) spoilers update for Thursday, May 2, tease that Shauna Fulton (Denise Richards) will work hard to get her daughter on board. Now that Shauna knows a Forrester Creations job is on the table, she definitely wants Florence “Flo” Fulton (Katrina Bowden) to take it. Shauna will even join Flo at her meeting to make sure this deal pans out.

Before Flo and Shauna head over to FC, Hope Spencer (Annika Noelle) will worry about this potential arrangement. She’ll have some concerns about Flo and Steffy Forrester (Jacqueline MacInnes Wood) being around each other on a daily basis – particularly when Steffy brings “Phoebe Forrester” (Isabella de Armas and Rosalind Aune) to the office.

Steffy won’t be in Paris forever, so Hope will just want to think ahead here. However, she’ll still desperately want Flo at the company. Ridge Forrester (Thorsten Kaye) will agree it’s a good idea. He won’t believe the whole Steffy thing’s going to be a problem – at least not on Steffy’s end. Ridge will assure Hope that they’re all so thankful for what Flo’s given them.

Later, Shauna and Flo will waltz in. B&B spoilers say Flo will mention Shauna’s fashion boutique experience in Las Vegas. Between that and a family that’s connected to fashion, Hope will suggest Flo’s sure to be a natural. She’ll push Flo to help her out at Hope for the Future, so Shauna will gush that it’s one of her favorite lines.

Ridge will also pile on the guilt when he embraces Flo and offers his gratitude. He’ll let her know she’s given them a wonderful gift through “Phoebe” and they love her as a Logan, too. Shauna will cover for a flustered Flo and insist that she must accept this incredible offer. Hope, on the other hand, will pick up on Flo’s hesitation. She’ll make it clear that Flo shouldn’t feel pressured at all.

At the same time, Hope would love nothing more than to have her dear cousin working alongside her. The Bold and the Beautiful spoilers say Flo will be put on the spot as everyone awaits her answer. Meanwhile, Xander Avant (Adain Bradley) will wonder what’s going on with Zoe Buckingham (Kiara Barnes). He’ll gently encourage Zoe to trust him enough to open up.

Zoe will be reluctant at first, but she’ll cave a bit when Xander guesses this is about her father. B&B fans know Zoe’s keeping Dr. Reese Buckingham’s (Wayne Brady) baby swap secret, but she won’t tell Xander. She’ll admit Reese is in over his head, but she’ll want to drop the subject and move on. Zoe won’t want to let her dad ruin the life she’s built for herself.

The Bold and the Beautiful spoilers say Xander will provide reassurance. He’ll tell Zoe that they’re solid and nothing’s going to mess with that. Unfortunately, that baby switch bomb could indeed rock their relationship. Xander will inevitably find out one of these days and it should spark a major fight when he does!

It sounds like some exciting scenes are coming up. We’ll give you updates as other B&B news emerges. Stay tuned to the CBS soap and don’t forget to check CDL often for the latest Bold and the Beautiful spoilers, updates, and news.