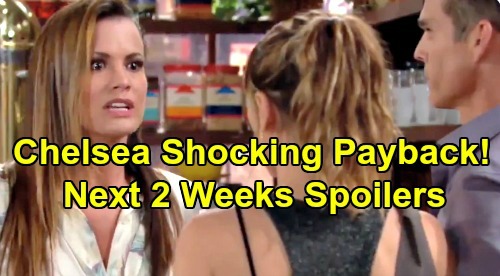 The Young and the Restless (Y&R) spoilers for the next two weeks tease that some shockers and shakeups are brewing. During the week of August 26-30, Chloe Mitchell (Elizabeth Hendrickson) and Kevin Fisher (Greg Rikaart) will be brought in the loop on Michael Baldwin’s (Christian LeBlanc) plan. It turns out Chloe’s arrest was just a move so she could gain her freedom.

Michael will get Chloe out on bail and insist he’s going to push for probation along with out-patient therapy. Chloe won’t have to live on the run anymore, so she’ll be incredibly grateful. However, Billy Abbott (Jason Thompson) will cause some concerns when he shows up at the Chancellor mansion and confuses Bella Fisher for Delia Abbott (Sophie Pollono). He’ll scare the kid as his downward spiral continues.

You may have noticed Billy’s gum habit, which will be even more evident onscreen soon. That’s because he’s got an alternate personality! The Young and the Restless spoilers say Billy’s alter will take steps to stop Adam, which will bring a dangerous faceoff. A surprise interruption will derail this showdown, so Adam will live to see another day.

Over with Elena Dawson (Brytni Sarpy), she’ll grow closer to Nate Hastings (Sean Dominic) and keep a few secrets from Devon Hamilton (Bryton James). That could spell trouble eventually, but Nate will get things back on track with Abby Newman (Melissa Ordway) for now. After receiving the final paperwork for the Grand Phoenix, Abby will have a steamy celebration with Nate.

As for Devon, he’ll receive a letter regarding Katherine Chancellor’s (Jeanne Cooper) will. An attorney will want to meet and talk about some discrepancies, so Devon’s fortune could be at stake. Next, Lola Abbott (Sasha Calle) will push Rey Rosales (Jordi Vilasuso) to reunite with Sharon Newman (Sharon Case). She’ll think Rey should forgive Sharon and move past their issues.

However, Rey already seems to have found friendly closure with Sharon. He may suggest that not everyone can have the fairytale ending like Lola and Kyle Abbott (Michael Mealor) – although their fairytale won’t stay that way for long!

Next, Chelsea Newman (Melissa Claire Egan) will be rocked by Chloe’s return from the dead. She’ll make it clear that Chloe may have dodged the law, but she’s nowhere near done with her! During the week of September 2-6, Adam will have to hide his trail. This most likely involves that big mission of his. He intends to destroy his family, so he can’t have tracks that could be followed.

Other Young and the Restless spoilers say Sharon will stand her ground. If Adam cools off and brings up his marriage idea again, Sharon may have to remind him that it’s not happening. Over with Jack Abbott (Peter Bergman), he’ll gain a new point of view. Will Jack see Kyle in a new light? Could he discover what happened with Zoe Hardisty (Anna Grace Barlow) and worry about Kyle keeping it from Lola?

That’s one option to consider, but this could involve Jack’s love life instead. Whatever the case, Jack’s fresh perspective could put him on a new path. Finally, Y&R fans can expect Phyllis Summers (Michelle Stafford) to fall back into old habits. There’s no word on what that means just yet, but it can’t be anything good! Phyllis has some of the worst habits around town, so this can only lead to bad news.