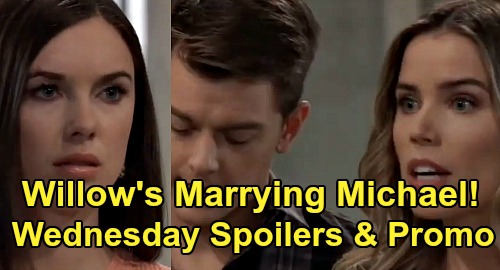 General Hospital (GH) spoilers for Wednesday, March 18, tease that Ned Quartermaine (Wally Kurth) will have an important task for Brook Lynn Quartermaine (Amanda Setton). After Brook Lynn’s chat with Sonny Corinthos (Maurice Benard), she realized the importance of family. Brook Lynn enthusiastically agreed to join ELQ and had plenty of ideas to pass along.

Of course, Ned reminded Brook Lynn that she’d have to start at the bottom – and it looks like the bottom will seem pretty boring to Brook Lynn on Wednesday. Answering phones and getting coffee aren’t exactly what Brook Lynn would prefer to be doing.

That’s why Brook Lynn should perk up at the mention of something a little different. Ned will have some confidential information for Brook Lynn.

After Ned warns these files for Brook Lynn’s eyes only, he’ll ask if she can do that. Brook Lynn will probably think Ned’s being over the top here, but she should agree it’s no problem. It’ll be interesting to see if Brook Lynn lets those files fall into the wrong hands. It seems awfully typical of Brook Lynn to screw up her first day on the job.

Regardless, Brook Lynn will get into a fierce argument with Maxie Jones (Kirsten Storms) and Lulu Spencer (Emme Rylan) later. Once Lulu decides she’s had enough, GH spoilers say Brook Lynn will face a Champagne soaking!

However, Maxie will also have some “super serious life-altering advice” for Lulu on Wednesday. Lulu will have to listen up and determine if she’s willing to take the guidance.

Next, Josslyn Jacks (Eden McCoy) will pick up on some awkwardness. Cameron Webber (William Lipton) and Trina Robinson (Sydney Mikayla) will give off a strange vibe, so Joss will have questions. Following Cam’s failed attempt to tell Joss how he feels, he shared a kiss with Trina. Cam and Trina will undoubtedly work to keep that lip lock a secret, but we’ll see how long they can pull it off.

Other General Hospital spoilers say Nina Reeves (Cynthia Watros) will catch up with Jasper “Jax” Jacks (Ingo Rademacher) at Crimson. There’ll be an issue to discuss, but Nina will take it that Jax has a contingency plan. Since Jax’s a strategic guy, Nina will wonder what steps he’s taken to handle this problem.

At the Quartermaine mansion, Sasha Gilmore (Sofia Mattsson) will be a mess over this custody battle. Since Michael could use a stepmom who seems far better than Nelle Benson Archer (Chloe Lanier), Sasha will blurt out that Willow Tait (Katelyn MacMullen) should marry Michael Corinthos (Chad Duell).

Naturally, that news should come as quite a shock to both Michael and Harrison Chase (Josh Swickard). The same goes for Willow, so this will definitely give all of them a lot to think about.