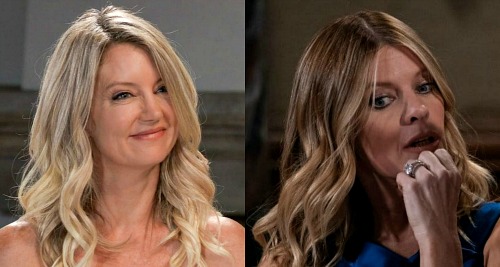 General Hospital (GH) spoilers tease that Nina Reeves (Cynthia Watros) will remain a huge part of the action when new episodes return. After Michelle Stafford left GH to reprise her role as Phyllis Summers on The Young and the Restless, many fans complained about the show bringing in a recast – albeit for different reasons. Some viewers felt like Nina just wasn’t needed. Others felt like no one could fill Stafford’s shoes.

However, General Hospital made a fantastic choice when they brought Cynthia Watros in as a Nina recast. Now that Watros is settled in the role and we’re all used to her portrayal, we want to know what you think. Who’s your favorite Nina, Michelle Stafford or Cynthia Watros?

Some fans might argue that Watros’ Nina has never really felt like Nina, which would probably be fair to say. Stafford’s Nina was bolder and had more of an edge, so Watros’ sweet and soft portrayal just isn’t very Nina-ish.

Of course, that doesn’t have to be a bad thing! In fact, Watros’ style fits far better for the last couple stories that GH has been telling with her. General Hospital is definitely focusing on the nurturing, maternal side of Nina.

Watros really hit her stride on GH went Sasha Gilmore (Sasha Mattsson) was deathly ill in the hospital and Nina was so distraught. By the time the fake daughter secret blew up at Nina and Valentin’s wedding, many viewers were sold on Watros as a Nina recast. Watros has proven she’s a strong actress who can handle scenes with powerful emotions.

Although Watros’ version isn’t quite the same type of Nina we had before, maybe she’s the Nina we need now! She almost feels like another character, but Watros brings a softness that’s useful – especially as we build toward the big reveal of Nelle Benson Jerome (Chloe Lanier) being Nina’s biological daughter.

Try to imagine Stafford’s Nina reacting to that news versus Watros’ Nina. That should bring two very different mental pictures! It’s interesting to compare Stafford and Watros’ versions, which are both great in their own ways.

It’s all a matter of preference when it comes to the one you prefer, but Watros is perhaps the best fit for this bio daughter story and all the Nelle bonding ahead.

Which version of Nina is your favorite? Did you prefer Michelle Stafford in the role or do you like Cynthia Watros best?