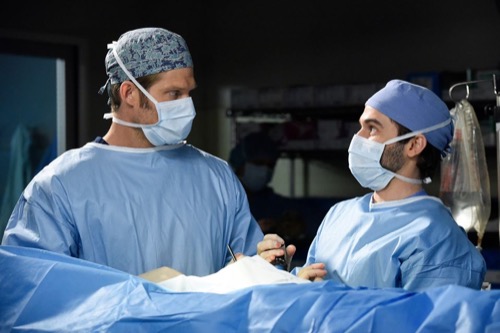 Tonight on ABC their hit drama Grey’s Anatomy returns with all-new Thursday, March 19, 2020, season 16 episode 18 and we have your Grey’s Anatomy recap below. On tonight’s Grey’s Anatomy season 16 episode 18 called “Give A Little Bit,” as per the ABC synopsis, “Meredith heads up a pro bono surgery day, but the patient’s response causes her to struggle to keep things in order. DeLuca treats a teenage patient whom he suspects is in danger and desperately tries to get Bailey to support his theory.”

Its Meredith’s Pro Bono Surgery Day! She was overwhelmed with surgical requests and she needed more doctors. Meredith tried asking Richard for help. She told him that she needed her friends and she couldn’t lose him too, but Richard turned her down. He could be her friend. He just couldn’t be her surgeon. He hasn’t revealed to anyone his hand tremors and he was also going through a lot at the moment. He was served separation papers by Catherine’s lawyers. She was graciously allowing him to keep his own house and so Richard was upset things have gotten this bad. He never thought that his second marriage would also fail.

Richard, therefore, was no help to Meredith. She had to find other doctors and it’s a good thing Amelia’s back. Amelia returned with happy news. She told Owen and Teddy that it was Link’s baby and so she was sorry for worrying them. She never meant to do it. She also wanted things to return to normal and they were going to. For her. For Link. They weren’t going to be returning to normal for either Owen or Teddy. Teddy had freaked out when she thought Owen fathered another child. She had been so scared of the possibilities that she slept with Koracick and it wasn’t a fluke. She slept with him a second time in the middle of all that panic.

Teddy hasn’t told Owen yet. She knows she needs to and she did plan on getting around to it. First, she just needed to be a doctor. Teddy was treating Kyle. He was a former Marine with PTSD and a possible TBI. Kyle was erratic, to say the least. He flipped out when they called his emergency contact and he had needed to be restrained. Kyle was a danger. The cops guarding him had wanted to move him back to the county and Teddy spoke against it. She said Kyle still needed treatment. She sent for Koracick to take a look at him and she got Amelia. Amelia was the only one that could respond.

Koracick was dealing with Pro Bono Surgery Day. He was double-checking that all the Operating Rooms were up and running. He and Hellmouth were the ones making sure that Meredith had everything she needed. Meredith dealt with the patients. She was going to provide surgery to Shara Freeman who has had surgery in the past and who has come out in pain in spite of the surgeries. Shara’s daughter wasn’t sure this new surgery would be any different. She was disrespectful and she was being a pain to everyone. The daughter was more of an issue than the mother. Meredith to be there for both and it was hard to do.

Meredith had to keep track of every surgery. She agreed to twenty-five in twelve hours and DeLuca had thrown an extra one. DeLuca was treating a teen girl named Cindy. Cindy came in with her aunt Opal and Opal did most of the talking for her. DeLuca was told that Cindy was shy. He chose to believe something different. DeLuca believed that he was dealing with human trafficking and he pulled Bailey from surgery so that she could “see” it for herself. Bailey talked to Cindy and Opal and she didn’t see human trafficking. She thought DeLuca was acting out of character and she removed him from Cindy’s case.

Bailey also asked DeLuca to be at her office tomorrow morning. DeLuca chose to ignore her and he signed Cindy up for surgery because he wanted to separate her from her aunt. He completely forgot their story. Opal told him that Cindy had been abandoned as a child and that she took her in when she was four. Its why they were so close. Its also why Cindy turned to her aunt whenever she was around new people and so DeLuca’s sickness had blinded him to the facts. He distanced Cindy from her aunt. He told Opal she couldn’t get out on the surgical floor and she ended up learning differently later.

Opal went up to the floor. She tried to go be with her niece and DeLuca accused her of human trafficking in front of everyone. DeLuca was clearly unstable. He’s been claiming he’s okay and he’s not. DeLuca was warned by his sister, Meredith, Jo, and even Bailey. He was manic and he was seeing things that weren’t there. He didn’t even see how crazy he was when he more or less kidnapped Cindy. He took a surgery she couldn’t have and then he tried to keep her from her aunt. DeLuca even called in a Code Violet. The other doctors came swarming in and they saw how had DeLuca was.

They came around him. They talked him down. He let go of Cindy and he was later suspended. Meredith came and talked to him. She proposed that she would report the possible child trafficking if DeLuca got help and she never did come around to reporting it in time. It turns out DeLuca had been right. He was in the middle of an episode and yet he had been right. Cindy was being trafficked and her “aunt” Opal got here out of the hospital before it could be reported. Meredith meanwhile went back to her surgeries. She also added more on. She agreed to take on Kyle who was going to be treated for seizures and she got around to Shara.

Meredith also a day for pro bono every month. There was room in the budget for it thanks to Koracick and so Meredith took advantage of that. She knew Koracick would find away. Koracick later spoke with Teddy and he told her he draws a line at married women. He doesn’t sleep with them. He also reminded Teddy that she was about to be one and so they couldn’t keep going as they were. Teddy realized that as well. She was in tears when Owen found her and pretended she was crying over a patient.

Jo also found a new roommate. Schmitt had broken up with Nico and he needed a new place to live. So, Jo invited him to stay at hers. She didn’t want to be alone at the apartment. She also didn’t want to be hit on and so a gay roommate was perfect for her.

And sadly DeLuca drove off into the night knowing he was right, but it was too late to save Cindy.