The Bold and the Beautiful Spoilers: 4 Exciting Bill Spencer Bombshells – What the Future Holds for Don Diamont, B&B Fan Favorite

BY Heather Hughes on February 29, 2020 | Comments: one comment
Related : Soap Opera, Spoiler, Television, The Bold and the Beautiful 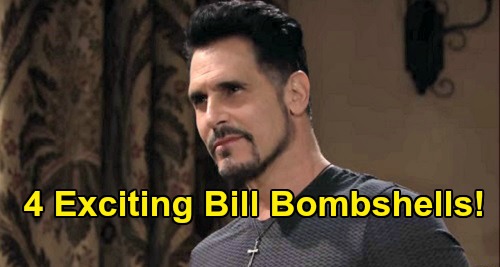 The Bold and the Beautiful (B&B) spoilers reveal that there’s one character who’s consistently buzzed about. B&B viewers are always eager to know what’s going on with Bill Spencer (Don Diamont) and what might be coming down the line. We’ve got some updates on what you can expect for Bill as his 2020 storylines continue. Here are four Bill bombshells for fans to look forward to.

Thomas Forrester (Matthew Atkinson) can be pretty menacing when he wants to be, but he’s no match for “Dollar Bill.” The Bold and the Beautiful spoilers say Bill will ultimately get fed up with Thomas and his manipulative ways. Thomas will cross the line one too many times and make himself a target. It’s never a good idea to get on Bill’s bad side, but Thomas will remain there for quite some time.

2. Bill Fights for the Logan Women

Since Bill is in love with Katie Logan (Heather Tom), that’s a big reason why he’ll fight for the Logan women in the months ahead. After Thomas’ Zoe Buckingham (Kiara Barnes) plan falls apart, it looks like he’ll get back to the business of eradicating the Logans from the Forrester world. Thomas will always have a special place in his heart for Hope Logan (Annika Noelle), but not the rest of her family.

Brooke Forrester (Katherine Kelly Lang) and Donna Logan (Jennifer Gareis) will also get some help from Bill. Thomas will clearly intend on doing some major Logan damage, but Bill won’t stand for that. He’ll work hard to keep the Logan presence alive at Forrester Creations and put this scheme of Thomas’ to rest.

Bill may be torn as Wyatt Spencer’s (Darin Brooks) love life gets increasingly complicated. He has great sympathy for Sally Spectra (Courtney Hope), who’s facing a terminal illness. However, Bill will also find himself feeling sympathetic to Flo over her sacrifices. According to B&B spoilers and news, Sally will survive beyond what her doctors predicted, so that’ll bring complications for Wyatt and complications for Bill, too.

B&B fans know Bill’s become a bit of a softie lately. It’s been nice to see Bill have all these warm family moments, but this character’s more than just a good partner and dad. Bill should be a fun and ruthless character – someone who serves his own agenda. Although Bill may not go as dark as he has in the past, The Bold and the Beautiful spoilers point to at least a little of the old Bill resurfacing.

It sounds like some great stuff’s ahead for Bill, so don’t miss all the chaos that’s brewing. We’ll pass along news as it emerges, so drop by often for our Bold and the Beautiful spoilers and updates.