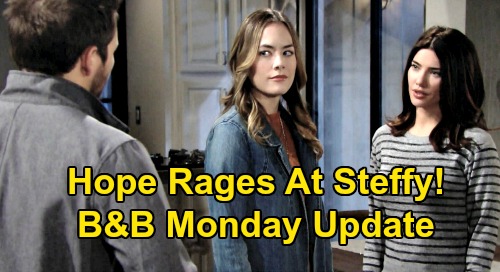 The Bold and the Beautiful (B&B) spoilers update for Monday, March 9, teases that Hope Logan (Annika Noelle) will have a strong reaction to Steffy Forrester’s (Jacqueline MacInnes Wood) confession. Steffy just came clean about Thomas Forrester (Matthew Atkinson) setting that “Steam” kiss in motion. She’ll go into more detail on Monday as she describes how sorry she is for her own part in the betrayal.

Hope won’t be all that surprised over Thomas’ continued scheming. This is nothing new for Thomas, so Hope will just have to accept that Liam Spencer (Scott Clifton) and Brooke Forrester (Katherine Kelly Lang) have been right all along. Thomas has never gotten over his obsession with Hope, so he’s using people left and right to get what he wants.

However, Hope will struggle over Steffy being a willing participant. She’ll lash out in Monday’s episode, but she’ll mostly just be hurt that Steffy would resort to this. Hope will indicate that she thought they were past all the games. She’ll view this as a step backward into true rival territory, but Steffy will assure Hope that she’s truly sorry. That’s why Steffy’s stepping up now to make it right.

Liam will likely chime in and try to help them find common ground. Both Hope and Steffy were manipulated by Thomas because that’s what he does – that’s who he is. Liam will think they have to band together and focus on the real enemy, which is Thomas and Thomas alone.

Hope will agree that’s a good idea since Douglas Forrester (Henry Joseph Samiri) is so heavily involved. The kid’s been used as a pawn day after day. Thomas obviously doesn’t care how much pain Douglas has to endure. He’s so focused on getting Hope back that he’s not paying attention to anything else.

Thomas’ tunnel vision could actually work in Hope, Liam and Steffy’s favor. B&B spoilers, news and updates say Thomas has his eye on the prize, so he won’t see their sneaky plan coming! In the meantime, Bill Spencer (Don Diamont) will feel the heat during a discussion with Brooke. He’ll get riled up about that “monster” Thomas and back Brooke up on how she feels about him.

It’ll feel nice for Brooke to have someone who’s on her side. She’ll express her appreciation to Bill and things will quickly get hotter. The Bold and the Beautiful spoilers say Bill and Brooke will lean in for a passionate kiss…and then another…and another… This will be a full-blown “Brill” make-out session, so they’ll have quite a secret soon.