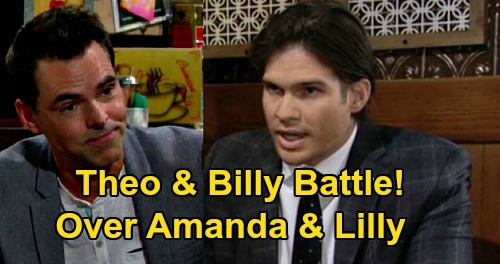 The Young and the Restless (Y&R) spoilers tease that we could see some very torn Genoa City residents once the stories are back in action. Y&R fans know Billy Abbott (Jason Thompson) and Lily Winters (Christel Khalil) are running Chancellor Communications together. They’ve faced some bumps in the road while navigating this new partnership, but there have been some flying sparks along the way.

Of course, there’s also Amanda Sinclair (Mishael Morgan) and her own lingering spark with Billy. Although Billy and Amanda decided to just be friends, it’s clear that they have a real connection. That connection grew over many honest nights at that dive bar and elsewhere.

Amanda and Billy shared a kiss before they opted for this pal status, which gave them a little taste of what might’ve been. Based on the way Amanda and Billy still look at each other, things aren’t over between them – not by a longshot! There’s more to explore here if Y&R will just let them.

Theo Vanderway (Tyler Johnson) also overheard Billy, Lily and Amanda discussing everything in his wheelhouse. If you want to know about social media and marketing to a younger demographic, Theo’s your guy! Since Billy and the others want to focus on all that at Chancellor, Theo seems poised to join their team.

Although Theo’s interested in Lola Rosales (Sasha Calle), she doesn’t seem to have much time for him. Lola may end up concentrating on her Miami restaurant and putting Genoa City behind her. If that’s the case, lonely Theo will be single and ready to mingle. We could have the makings of a Chancellor Communications love quad.

Lines are blurred between business and pleasure all the time on soaps. Just ask Summer Newman (Hunter King), who’s technically dating her boss! There’s no reason why Jabot should have all the inappropriate fun. Why not let things get messy at Chancellor, particularly once Theo’s in the mix?

Amanda’s been testing the waters with Nate Hastings (Sean Dominic), but that The Young and the Restless romance is a Snoozefest. Nate is just too sweet and unproblematic for that to be interesting. Amanda seems far more drawn to complicated Billy – and she may be even further drawn in by this working arrangement.

So we’ve got Billy, Amanda, Theo and Lily… There’d be some exciting possibilities with that quad! Could you see Theo becoming interested in Lily or even Amanda? There could be some jealousy on Billy’s part, which might dictate his own romantic choices. Y&R might as well mix it up!