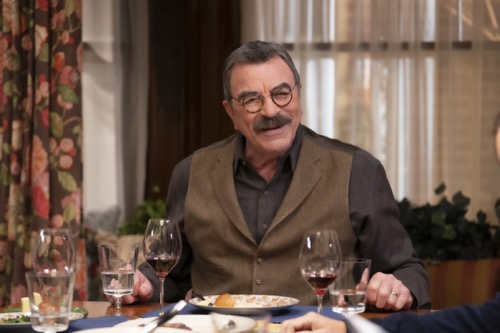 Tonight on CBS their hit drama starring Tom Selleck Blue Bloods airs an all-new Friday, March 26, 2021, episode and we have your Blue Bloods recap below. On tonight’s Blue Bloods Season 11 Episode 9 “For Whom the Bell Tolls,” as per the CBS synopsis, “Baez confides in Danny and asks for his help in proving her innocence after she finds a corpse in her front yard.

Erin struggles to find a peaceful solution when she receives harsh case notes from her boss.”

In tonight’s Blue Bloods episode begins with Baez leaving her house and she finds a man dead on her lawn. Meanwhile, Erin calls Anthony and tells him that she is very upset. Her boss, Kimberly Crawford, is giving her notes, it’s 101, and she doesn’t need her telling her what to do. Anthony tells her to write her a note, and tell her thanks for the notes and do whatever she wants to do to anyone. Erin writes right over the notes, in RED, “thanks but no thanks.” Anthony says that is not what he said.

Frank tells him that he needs someone to steady the ladder for him. Frank wants him to see a therapist. Sid says he is the strong silent type. Frank says Garrett and Abigail will see the therapist too, strength in numbers. Frank says, him too and he will see him first.

Baez tells Danny that the guy on her lawn was her trainer she met at the gym, they went on a few dates. Danny asks if he was married, she says not that she knows, he said he was single and she didn’t question it.

Danny is called into the boss’ office and told to sit down. Internal Affairs is going to sniff around Baez and he wants Danny to do a dry run first, it is what is best for her.

Erin goes in to see Kimberly and tells her not to give her notes like she is a wet behind the ears ADA, no. Little did Erin know, Kimberly was on the speakerphone with someone, the governor’s new deputy, Cyrus. Erin apologizes, Kimberly tells her it is unacceptable. Erin says the thing with the notes still stands. Kimberly tells her that they can sit down tomorrow and have a conversation.

Dr. Alex Dawson, the therapist, arrives at Frank’s office. Dawson guesses that Frank doesn’t need the help, he is just doing this for his employee. Frank says it is not like that, it is complicated. Frank says he is there to kick-start the process. Frank gets up and opens the day, and tells Dawson he has a packed day, thank you.

Eddie goes in to see Jamie and tells him that he needs to rethink the punishment that he gave Diaz, he says he won’t. She hands him a piece of paper, it is a formal notice from the union, they have a preliminary hearing tomorrow with the CO. He crumples up the paper.

Danny interviews Baez, she says that she didn’t know her therapist well, only 3 or 4 dates. Then he asks if they were intimate, she says she barely knew the guy. Baez gets upset at the questions, he tells her they are one/tenth of what Internal Affairs is going to ask her.

Danny tells Baez they need to talk, he shows her a blond in the prescient, she knows the trainer, it is his fiancé.

At home, Eddie sees Jamie on his computer and asks what he is doing, she knows he is writing his response to the CO and she tells him it is not fair, he is a lawyer and will know what to say.

Frank walks into his office, Abigail, Sid, and Garret are there. Sid has a bandage on his thumb, he sliced it with a butcher knife, twelve stitches. Frank tells him to take a break, he says he doesn’t want to. Frank asks if he saw Dawson, Sid says he can’t find the time. Frank tells him to get it done.

The next day, Baez stops by to see Danny, she wants to know about the interview with the fiancé, Danny says her alibi is rock solid. She says she got a package this morning when the delivery guy rang her doorbell, her phone rang at the same time. She has them synched together, she forgot about it. They watch the video when the trainer came to the door to ring her bell, and then a man runs up to him and kills him.

Sid stops by Frank’s office and asks why he had him tailed. Frank tries to get a word in, he says he had nothing to do with that stop, nothing. Sid tells him that he can’t blame him for thinking that, he has been riding him all week. Sid says he has rights to his privacy like everyone else. Frank says he just wants him to be safe, it’s like putting a seatbelt on. Sid looks like he is going to collapse, Frank gets up and tells him to take the day, it’s coming from a friend.

Eddie and Jamie have their meeting, the CO listens and says that Jamie is right, they can’t show leniency.

Anthony goes in to see Erin, she shows him a letter and he says she is not doing this. Erin says Kimberly is pushing her out. Anthony tells her that she resents Kimberly, she got the job that she wanted. Anthony tells her to grow a pair and get to work, he tears up the letter in front of her.

Baez is home, she is looking at photos of her and her trainer friend who was murdered. She goes into the fridge to top up her wine and drops the glass, near the door, inside the house is the fiancé with a knife. They struggle, and Baez hits her over the head just as Danny comes crashing in the door.

Kimberly visits Erin at her request. After their lunch, Erin says she thought long and hard about what she said, but her notes don’t work for her. Erin threatens to leave, she tells her he can work with her, but not for her. Kimberly tells her to keep it civil, Erin agrees.

Abigail and Garrett can’t find Sid, when Frank comes in they lie and say he is running late, but Frank knows they are lying for him. Frank tells them Sid is going to be fine, but he is not going to be in for a while. He found out a few weeks ago that his partner of fifteen years had died, no bedside visit, no funeral, no chance to say goodbye and Frank can’t think of anything worse.

Danny goes to see Baez in the hospital, she has just a few scrapes and bruises. He tells her that the fiancé’s alibi wasn’t as good as he thought it would be.

At Sunday dinner, Sean got a letter from his first-choice college. Frank tells him to open it and cowboy up. Sean opens it and tells the family that he got in. Everyone smiles and claps, cheers for his success.

Frank is in his office, Dawson stops by his office. Frank says he is not surprised that Sid hasn’t reached out to him. Dawson says you can’t lead a horse to water. Frank tells him that he doesn’t want to waste his time, he lost his wife to cancer, his son and daughter to murder, lost twenty-three of his people in the line of duty, he has a grandson in harm’s way and probably had a hand at putting him there, and some days he can’t see past that scoreboard.