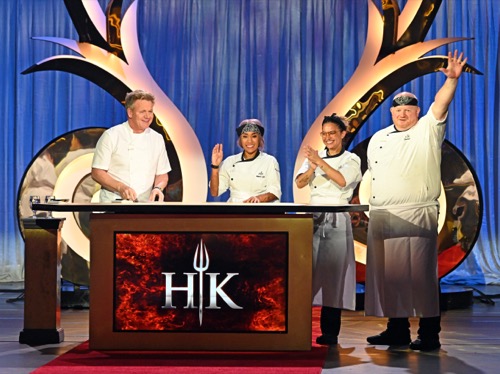 Afterward, he takes the chefs to his top-secret Las Vegas spots and at their final destination, they are tasked with cooking their final Five Course meal. The two winning chefs pick their brigades from the eliminated chefs of the season, before heading into the finals.

Tonight’s Hell’s Kitchen episode begins with the final three; Kori, Mary Lou, and Declan finding out they are in the chosen. They arrive back in the dorm and finds gifts galore, along with champagne. Declan says all the rollercoasters; the ups and downs, were worth it to get to this point.

Gordon calls the dorm, he tells them to get back into the kitchen. He tells them that for their final challenge, they are going to team up with their sous chefs to make one amazing cold appetizer, one stunning hot appetizer, a seafood entre, a beautiful chicken entre, and a mind bowing meet entre.

Before there are three of them and only two sous chefs; Justin and Christine, Gordon has invited season seventeen winner, Michelle Tribble. Gordon has three cards, he has the final three choose one and find out who they are paired with. Declan is with Michelle, Kori with Christine, Mary Lou with Jason. Gordon tells them to head up to the dorm and decide which five dishes they want to showcase.

Kori’s idea is to keep it single and elegant, her on a plate. Jason tells Mary Lou to keep it southern, she is not fine dining and fancy. Michelle tells Jason to stay focused, he can do this and break the streak of women winning Hells Kitchen for the past five years or so.

The next day, Gordon calls Kori to his office to talk about her menu; Christine is there as well. He tells her that some of the things she has done, she has done before, it is not her. There are two things missing; her father and her son. Kori turns around and there is her family. Her father says they are so proud of their little girl. Kori is even more determined to win this competition.

Mary Lou is next, she runs to the office to meet with Gordon. Jason is there, he tells her that she has a one in three chance to win. He has also flown in some VIPs to meet her, her mother, and her cousin. Her mom is her rock and her inspiration. Gordon tells Mary Lou that by the way, her menu is amazing.

Declan is last, Gordon tells him that at this point they like to fly in family, and Mary Lou and Kori’s family are there. Gordon says that his parents are on vacation, and so he has re-routed his parents to be there with him. Declan hasn’t seen his parents in two years. His mother tells him that they are very proud of him, he has made quite an achievement.

The final three sit with their families and tell them about the journey so far.

Declan, Kori, and Mary Lou are in front of Gordon and he tells them to get ready they are going out, the limo picks them up for a Vegas tour. The first stop is Caesars Palace, they enjoy some food and champagne. Gordon tells them that they are absolutely naturals in the kitchen.

The second stop is starting underground, they go inside a “titanic” elevator and arrive in front of a studio audience. Mary Lou is hilarious, she says, “I’m not wearing the right shoes.” The final three change, and outside, there are three kitchens set up where they are going to prepare their final meals.

This challenge is by far the most important and the most difficult for the final three. Declan says he has always kept aces up his sleeve and now he is pulling them out. Mary Lou is worried about her steak, she throws it back in the grill for a bit. Kori is done, she starts plating. It’s a mad dash to the end as the chef’s fight for their lives in the kitchen.

Declan, Mary Lou, and Kori are done cooking and return to the stage. Mary Lou says her first dish is beautiful, small, and full of flavor like her. Declan says he is sure about his flavors, all good. Their dishes are going to be judged by five world-renowned judges; Michelle Bernstein (James Beard Award Winner, 2008), Declan is first with his cold appetizer, then Mary Lou and Kori. Kori gets a 10, Mary Lou a 10, Declan a 9.

The final two get to choose their teams for the final challenge.