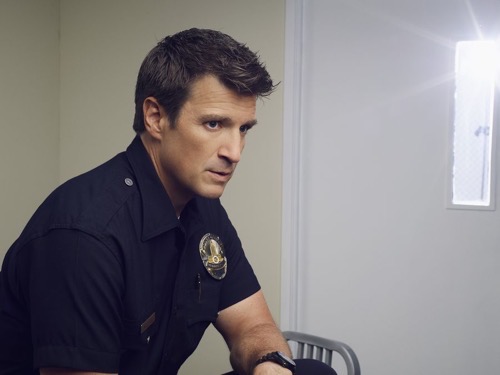 Tonight on ABC their new series The Rookie airs with an all-new Sunday, January 24, 2021, season 3 episode 4 called, “Sabotage,” and we have your The Rookie recap below. On tonight’s The Rookie season 3 episode 4 as per the ABC synopsis, “Officer Jackson West’s relationship with his new training officer, Stanton, has escalated and he begins to work with Sergeant Grey to find a solution.”

We see a guy with a clown mask on, he is bribing someone on the computer when Harper and Nolan knock on the door. Denis answers the door, when the person on the computer, his teacher hears the cops and he calls out to them. It appears that Denis has some photos of him and is bribing him to pay him an amount of bitcoin or he will release them.

Nolan is home, his mother bought cases of CBD oil and is planning on selling it. Meahwhile, we see Jackson West jogging, Grey pulls up alongside him and says he has a point there is a problem with a Stanton and wants to know what he will do to take him off the job.

West says he will do whatever it takes. Grey says he has seen a hundred guys like Stanton and he just to keep everything in his book, act like his friend, don’t give him any reason to suspect. Only Bradford and Chen will know about it, if he is going after Stanton, he needs backup.

Harper tells Nolan that he is driving, she needs to enroll her daughter in a class.

West and Stanton are in the car on patrol. Stanton sees a guy walking across the street and stops to check him out because he tells West that he looks suspicious. They check him out and the guy is fine, no priors and he was just, crossing the street.

Nolan and Harper pull over, a woman runs up to their squad car and says they need to see what his neighbor is building in the backyard. Nolan gets out to check it while Harper calls the academy to get her daughter in a class. In the backyard, Nolan finds a man inside some kind of a spaceship, it takes off and the man is flown across the street, on top of their squad car. The incident interrupts Harper’s call and when she tries to call back, the academy is closed.

Bradford and Chen head to a call, the neighbors are getting their deliveries stolen. Bradford finds the culprit, it is a dog. They follow the dog and he delivers the food to a man in a garage, who was praising the dog but when he sees Bradford and Chen, he says bad dog.

Wesley tells Angela that he wants her to see his mom’s obgyn. After his dad died, he took a genetic test and he is predisposed to a syndrome that can cause mental disabilities, seizures. Angela is shocked, she tells him that she will make an appointment to see his mom’s doctor, but she has to get back to work.

Harper goes to see the academy, the director tells her it is too late. Another parent is there, a father of one of the other girls and he was also turned down. He says he is going to poke around and see if he can get Holly in, he will do it for her as well.

Stanton and West pull over a woman, she ran a stop sign. She hands over her licence and is very nervous. Stanton tells her that they are going to search the car. She tells him that there are guns in the trunk, they belong to her ex-husbands, she was bringing them to the police, he is threatening to kill her. She used her old key and took the guns. Stanton tells her that she is being arrested for burglary.

West asks to speak to Stanton, then asks him if they really have to take her in. They can just take the guns in and write it up, “come on man.” Stanton tells him never to speak to him like that again, “come on man,” he is his superior officer, not his home boys. And, they don’t know, that woman could have been on the way to her ex-husbands to blow his head off.

Later, West tells Chen about what happened with the woman, her story checked out. She has a restraining order against her husband. Chen tells him that he can’t blame himself.

Grey’s wife tells him that she is going to reinvent herself, find her purpose, she is going to speak to Nolan who is sitting with Harper. Before Nolan sits with Grey’s wife, Chen gives him advice, just nod and don’t give any advice, because the advice he gives, could be not want the boss wants to hear.

Stanton is beside Bradford and asks him why West is questioning his every move. Bradford says it is the mark of a good student.

Nolan finds his mother at the precinct, selling the CBD oil and telling everyone that he loves the stuff. He tells her to go home.

Lopez’s sergeant comes in and says they found a body in bag at LAX, no head, no hands, no witnesses, and he is giving it to Vargas. Lopez is surprised, she is on rotation, she asks Vargas if he usually does that, and he says almost never.

Nolan gets a call from Grey, his mother sold all her CBD oil to his wife for ten thousand dollars. Nolan goes to speak to his mom and says she is giving back the money, and asks if she knows what this can do to his job. She says she is not giving her back the money, she was happy to buy the franchise. She tells him that he has the same problem as Grey, they both look down on woman.

At the station, people are starting to get a rash from the CBD oil. Grey sees Nolan and calls him to his office where his wife is waiting and he is ready to apologize to him. Nolan tells them that the oil is giving people rashes, and they are surprised that she sold snake oil. Nolan says that he is sure that his mother didn’t know. He calls her, and she hangs up him.

Chen and Bradford go to speak to officer Owens, he used to work with Stanton. Chen asks right out if he thinks Stanton is a racist. Owens says he doesn’t know them, but he does know that if he says something, he knows what Stanton can do to him; he leaves.

Nolan got the address of the CBD oil supplier, he and Grey are going to head over there, out of uniform.

Stanton gets a tip, he is in the car with West and they head to an alley where the finds some boys; it looked like a drug deal going down. They catch the guy who was dealing and when he is rude to Stanton, he drops his body cam and tells West that he will take the guy in. West is worried that he is going to beat the boy up, he calls Grey but gets his voicemail. West runs towards the squad car just when Bradford and Chen show up. Stanton tells them that his former partner, Owens, always had his back, and still does.

Lopez tells Harper that she is pregnant, and she feels like she is being reassigned for no reason, even though she didn’t tell anybody about it.

Grey, Nolan and his wife show up at the supplier’s office. The guy tells Grey’s wife that he is not giving her any money back. When things get tough, Grey’s wife leaves and one guy tries to go after her, she sprays him with pepper spray and kicks him while she dials 911 for backup. And, during the whole standoff, they find out that Nolan’s mother paid two thousand for the CBD oil, not ten thousand.

Holly’s father visits Harper at the station, he got the two girls enrolled in the academy. He tells her that she can take him to dinner to thank him.

Lopez corners sarge in the parking garage she tells him that she doesn’t want to be bumped just because she is pregnant. He finds her amusing and tells her he didn’t know she was pregnant and believe him, he won’t be easy on her.

Bradford and West go to see Owens, he got a promotion for having Stanton’s back and he doesn’t want to be involved, because Stanton won’t be taken down easy.

Stanton writes up West and tells Grey, it was the drug bust. West left the backpack with the drugs because he was worried that Stanton was going to beat up the kid. Stanton set him up.

Nolan says goodbye to mom, sends her back home.