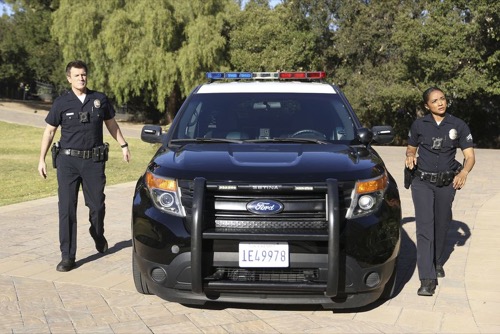 Tonight on ABC their new series The Rookie airs with an all-new Sunday, February 28, 2021, season 3 episode 7 called, “True Crime,” and we have your The Rookie recap below. On tonight’s The Rookie season 3 episode 6 as per the ABC synopsis, “The team gets the true-crime docuseries treatment when they analyze a recent case featuring a former child actor whose adult life has garnered him a cult following.”

In tonight’s The Rookie episode Nolan is doing an interview, talking about how his son was born with a heart defect, but something that always cheered his family up was Paul’s Place. The star of the show, the boy who played Paul, was Cory Harris. He always wanted to meet him, that was before he found out what he had become. He couldn’t believe what that sweet kid had grown up to be.

Jackson West is in an interview seat in the police department, he asked to tell them about June 3rd. Jackson says it started like any other day, just a few mundane calls and then everything went crazy. Then we see a newscast, the emergency alert system inadvertently sent out a text message stating that a nuclear missile was headed for the city. Chen says they helped as many people as they could and then headed for shelter.

That is when they saw them, five people dressed in white robes on the roof of a building, waiting for their ride from the aliens. There was this guy named the prophet Jedidiah who told them that on June 3rd ET was coming to embrace his followers during their essential. For the first time in history, the cult leader guessed the right day for the apocalypse. Turns out that the prophet guessed June 3rd for years, it was just dumb luck that the alert went off. These people were going to jump to their death, thank goodness officer Lopez was there, she saved all of their lives.

Then we see Cory Harris coming out of a house, a father is yelling that his daughter is in there and she is being held against her will and is a cult leader. Cory says it is a religious movement. Harper is there, he asks Cory to get Debbie, she tells her father that she is home now, she is happy there. Her father tells her that her mother’s cancer is back, she is dying and only has a couple of weeks to live, she needs her. Debbie runs to her father and hugs him. Harper says it was like a switch flipped, she packed her things and left with her dad.

On another occasion, a security guard for Harris called the police because there was blood outside the door. Bradford and Chen search the house and find blood in the shower. They don’t find a body, so they treat Harris like a missing person case.

The Day after Cory’s disappearance, Nolan and Lopez interview Debbie’s father, he was at the hospital with her the whole day. Nolan tells him that Corey is missing and there was violence at his house. The man says good, he destroyed their family, it was just supposed to be an acting class.

Corey Harris, acting school 2017, he is teaching. When the acting jobs dried up, he started an acting school. He convinced these kids that he was the only one that could help them navigate this evil world. These twenty-somethings fell for it and paid thousands of dollars. It wasn’t long before the kids starting to treat him like a guru, he could do no wrong.

When Bradford and Chen were searching the house, Chen finds a mummy in a suit under the bed. Bradford puts on his gloves and pulls them out. It looks like Charlie Chaplain’s mummy. Debbie tells Chen that Cory stole the mummy from Rainn Wilson, an actor who owes his whole career to Charlie Chaplain. When he found out he was robbed, he was upset at losing his best friend. Harper says it actually wasn’t Charlie Chaplain’s body, the mummy they found is one of dozen of fake Chaplains that are floating around.

Cory turned his acting school into a burglary ring that would target celebrities. And, he made the kids think that he could control their destinies. We see a video of Corey’s mother, Laurie, she says he was so dedicated to his craft, a leading man, and she knew he would succeed in life. Then we see someone knock at Jackson’s door, he is there with Sterling Freeman, who the person says was once a student of Cory’s and his real name is Skipper Young and he participated in a ring of celebrity burglaries. Skipper makes a confession to Jackson about who he is.

We then see a video of Skipper Young aka Sterling Freeman, the actor. He now has an Australian accent, he says he knew who Corey was, Paul’s Place was big there. He said the burglaries would help their mindset. He fell out with Cory just before his arrest. Cory was calling himself a prophet.

Jackson says he had no idea that Sterling was a felon or Australian. Jackson goes to confront Sterling who says he changed his name after he was caught, he is different now. The past is behind him. Jackson says he doesn’t know if he believes him.

Then they talk about the Southland Stalker, Dan Marcie, it was always rumored that he didn’t act alone. He knew Cory, met him at one of his acting classes, looking for ways to up his game, a way to get his victims to come to him willingly. He got tired of bashing people in the head and drag them to the car, he wanted them to come to him willingly. Cory also helped him prepare for the trial. He says he had the jury in the palm of his hand, even though they convicted him.

Cory’s former co-star and former teacher, Charlotte Luster, gave them their break in this case.

Chen and Bradford head to the airport, there is a car that was left there for a week and smells really bad. It is Charlotte’s car.

We see an interview with Cory and Charlotte, they were childhood sweethearts that found each other when they got older.

At the crime scene, they found a screenplay, 500 pages long, called “The Worthy.” Most of the officers thought it was terrible. Cory based his cult on a bad sci-fi script.

Cory wasn’t on the rooftop with his followers, because he was filming it. Five people almost died, because these kids thought he was real. We then hear a recording of Charlotte and Cory having a falling out.

Chen says she was on her phone when she got a notification from someone, Cory was alive. We then see Cory at the station, Harper reads him his rights. He took the right to remain silent part really seriously. He stayed quiet for five and a half hours. Nolan tells him that the blood found in his house and Charlotte’s car belonged to Charlotte. Cory acts upset, then says he didn’t do it, he could never hurt another person. Nolan mentions his followers that almost jumped off a roof, he says they were doing it for themselves. Cory asks for a lawyer.

Wesley Evers, Cory’s attorney shows up. We see video footage of Cory’s mom tampering with the evidence, so they know she is involved in the crime. They interview her and tells her that they saw her drive Charlotte’s car to the airport and leave it there. Harper then says they found what was left of her body. Charlotte’s car had GPS tracking, Nolan tells her she should have looked into that before she dumped her body. She says Cory had nothing to do with it, she killed her all by herself.

His mom confessed and Cory passed the polygraph, they had to let him go.

Next, we see Cory doing an evening sermon on social media when he sees someone coming up the stairs behind him. Then, the lights go out. Cory goes to investigate, the live video is still playing. Cory screams, we see him running, he makes sit back to his room and he locks the door. Cory calls 911, he says someone is in his house and he is in danger.

The police show up, a guy names Ronald Sanchez comes out of the house, he was the stalker’s accomplice and was upset that Cory convinces the stalker to say he was alone in his crimes. The guy cut out Cory’s eyes and had them in his hands when the police arrive. They have him in custody, Nolan and Harper find him up in his room, his live video was still on and four hundred thousand people were watching.

In the end, we find out that everyone was doing interviews for True Crime about this case.

Nolan says it was his craziest case, Jackson says he is no longer with Skipper. Since Cory’s death, his cult has grown tenfold. His mother has taken over the cult from prison. She claims that Cory has ascended and prophesized. Ronald Sanchez is awaiting trial for Cory’s murder.