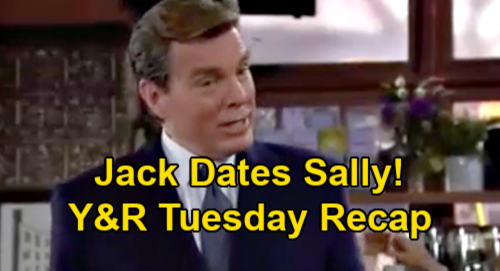 Billy will say that he wants to acquire a media company that Ashland Locke has put up for sale. Lily will agree to look into it.

At Newman Enterprises, Victoria Newman (Amelia Heinle) will arrive to find Victor Newman (Eric Braeden) in the office. Victor will want to talk about acquiring a media company to stick it to Chancellor Communications and make Billy’s life miserable.

Victoria won’t like the idea, but after she leaves, Victor will get on the phone and tell someone he wants to negotiate with Ashland Locke for his media company.

At Jabot, Kyle Abbott (Michael Mealor) will have a blurry photo of three-year-old Harrison Locke pulled up on his computer when Summer Newman (Hunter King) enters and asks who the kid is.

Kyle will lie and say it’s a picture of a buddy’s kid, and then Summer will say that she’s going to Los Angeles to meet with Bill Spencer (Don Diamont).

Summer will want Kyle to go to Los Angeles with her, but Kyle will make up excuses not to go. Later, Kyle will call someone about getting the Abbott jet ready for a trip to New York when Summer will be away in Los Angeles.

Meanwhile, at Crimson Lights, Lauren Baldwin (Tracey E. Bregman) will find herself exasperated with Gloria Fisher Bardwell (Judith Chapman), who’s starting as her new assistant tomorrow. Sally Spectra (Courtney Hope) will arrive and try to give Gloria tips on being Lauren’s assistant, but Gloria will balk.

Soon, Jack Abbott (Peter Bergman) will walk in, and Gloria will make it known that she and Jack used to be a thing.

Once Gloria leaves, Sally and Jack will talk about some of his exes, and Jack will be inviting Sally to dinner just as Summer walks in the coffeehouse.

Jack will take off, and Summer will tell Sally that she’s going to Los Angeles tomorrow. Sally will again warn Summer about Bill, and she’ll share that Bill blew up the Spectra building while she was inside, and that Summer had better be careful.

At Society, Billy will see Victoria, who will warn him about Victor’s vendetta over the exposé about Adam Newman (Mark Grossman). Lily will arrive to meet Billy for dinner, and just then Billy will get a text saying that Newman Enterprises is making a move on Ashland Locke’s media company.

Victoria will be surprised, and Billy will notice, assuming that Victor is behind this.

Sally and Jack will meet at Society as well, and in an awkward moment, they’ll both start talking at once. Sally will say that she wants to clarify something, and she’ll ask if this is a real date. Jack will affirm that it’s a date.

Back at Jabot, Summer and Kyle will reconnect, and Summer will say that maybe she should hold off on her Los Angeles trip. Kyle will encourage Summer to go on the trip, knowing that he needs her to go so he can go to New York.

Back at Newman Enterprises, Victoria will blast Victor for pulling a move behind her back. Victoria will gripe that Victor still doesn’t see her as the true CEO. “You’re as controlling as you’ve ever been,” Victoria will fume. “You bet,” Victor will fire back.

Tuesday’s episode of Y&R is going to be terrific, so be sure to stay tuned! We’ll keep you up to speed on all the latest Young and the Restless news, spoilers, and updates. Stick with us here at CDL!