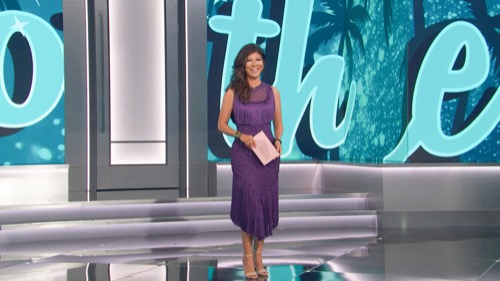 Tonight’s Big Brother episode begins with Daniel, who is thrilled that he won the HOH, he says it is his dream come true. Pooch says he is playing the game how he coaches, he is keeping it fair. He says it sucks that he choose all girls as the Backstage Boss, but he was being fair.

Alyssa is freaking out, this Backstage Pass could ruin her game. Michael is not telling anyone that he is an attorney, he says he is an escape room employee. Brittany says she is a toy tester, but a hypnotist. The lies begin!

The group pours some champagne and then goes into the living room to give an intro on themselves to everyone. Joseph is trying to keep his gameplay, but there are a lot of pretty girls in the house.

Paloma loves Taylor, but she wouldn’t have told the house that she was in pageants because they will all think she is good at being fake. Daniel loves Nicole’s vibe and thinks they are really going to get along. Indy reveals that she is going for her degree as a sex coach, Pooch is wondering if she is looking for an assistant coach.

Later, Pooch comes in with some backstage shirts for his girls who are in the backstage group with him.

Daniel calls everyone to the living, he says there is the VIP section and the cheap seats. And, the HaveNots, which include cold showers, slop, and uncomfortable sleeping arrangements. Michael volunteers, he thinks he will gain favor with the house and the HOH. Joseph, Monte, and Kyle also volunteer. Daniel is thrilled he didn’t have to choose anyone. The HaveNot room is filled with floaties, a slide, lawn chairs, and towels.

Nicole is with Daniel in the HOH room, The minute he locked eyes with her he knew she was going to be his final two, he knew he could trust her. Nicole feels the same, she feels like he is her ride or die. He is calling their alliance the Road Rats, they are going to keep it quiet until they are sitting in the final two chairs, from rats to riches.

Paloma and Alyssa are bonding, they have a lot in common. They make a final two alliances and call themselves the Scorpio Sisters.

Taylor is just being one of the guys, she is trying to bond with them, so she plays pool with them. Monte loves how Taylor is competitive. The other women don’t seem impressed with Taylor.

The girls are all in a room together and they are talking about Taylor, the girls start forming a core alliance, called Girls Girls.

Ameerah goes to speak to Daniel, he says he has nobody on his radar. She says he should get rid of the better competitors; Monte, Joseph, Michael, and Kyle. Daniel thinks she may have a point, maybe the four of them volunteered for HaveNots thinking it would not get them on the block.

Michael’s plan was to win HOH the first week, but now it is time to pivot. He is doing more listening than talking. Michael asks Daniel if he has given any thought to who he was going to put up. He says no, but he is welcome to go to the HOH room and talk to him anytime.

Michael goes to the HOH room to speak to Daniel, he wants him to see how he can be an asset to his game. And, he tells him that if he doesn’t nominate him he would be very grateful, and if he won HOH he would not put him up. Daniel is not impressed with Michael’s pitch and calls it bull crap. He knew immediately when Michael held the door coming in he was a superfan and he doesn’t trust them.

Kyle was very sheltered as a child, he loves that he is able to learn so much about other cultured in the BB house. Joseph is happy to be in the BB house as an Arab to represent who he is.

Terrance is worried that Daniel is keeping his HOH on the down-low. Terrance tells Taylor that maybe they should stick together since they are both married, but she doesn’t think that is a good idea.

Paloma is with Daniel and she throws Taylor’s name out there, she says she doesn’t know if she trusts her. But, she just wants her nominated because she is not a part of the Girls Girls. Daniel plans on putting up two people who are not in an alliance with anyone, so Taylor is a good choice.

Time for the nomination ceremony. The first houseguest nominated is Terrance, and the second is Michael. Daniel says the only fair way to do this is to put up two people who haven’t talked much game with him. Terrance is his pawn, and Michael is his target because there is only room for one superfan in the BB house, and that is Daniel.