Kris Humphries Is The ‘Extra’ Whom Kim Kardashian Can’t Fire 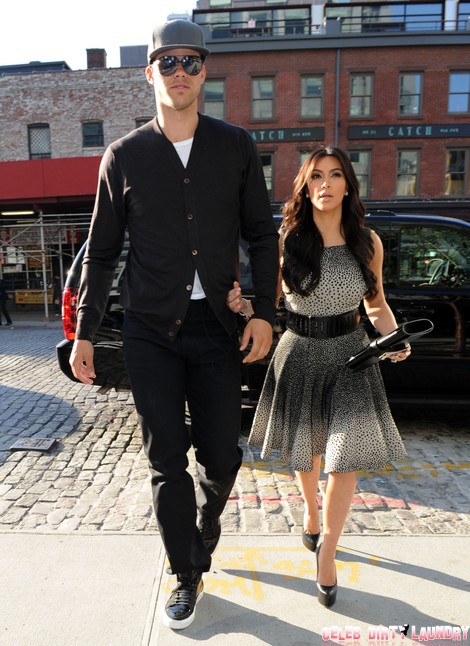 Whenever you are producing a reality show it is important to have all your people in place before the cameras roll.  The budgets for reality TV shows are notoriously small, typically 10% or less than those of regular TV series.  So when Kim Kardashian and Kris Jenner decided that Kim needed to get married to add content to their reality empire the first thing they did was look for a victim groom.  Kris Humphries seemed like the perfect match at the time.

As an NBA player Kris was a bit of a celeb, he was likable, good looking, has a ‘K’ name, and he is enormous – very important because that made Kim and most of the rest of the clan appear tiny – even petite.  Of course there’s always half-sister Khloe Kardashian… Even NBA giants don’t help camouflage her bulk.

But as I actually watch their shows – my job as a blogger entails these nasty travails – I noticed that right from the outset, even before the marriage, Kim had nothing but disdain for Kris.  Her dismissive attitude was of course picked up by Kourtney Kardashian and Khloe as well.  Yes – Kris was meant to be the patsy, the straight man, the foil.

When the clan was done with him – when he his limited period of usefulness was over – Kris learned over the Internet that his loving wife had filed for divorce!  Not bothering to inform your husband that you are divorcing him shows behavior typical of coarse poorly raised people.  You know the type – people who put out sex tapes produced and marketed by their mothers.

But nobody expected Kris to be so greedy and unappreciative.  The dude was turned into a superstar by a made-for-TV 72-day marriage to Kim Kardashian.  He made a bundle of dough for his trouble; he got to have sex with Kim Kardashian presumably for free; he subsequently signed a $24 million NBA contract and has become a famous celebrity.  But Kris still isn’t satisfied – perhaps they should have let him in on the fact that his marriage was fake and strictly for television BEFORE the wedding.

Now Kris appears to be on a mission to get Kim to admit that the marriage was fake – and if she won’t confess he is looking for a court to support his assertion.  Kris wants his pre-nuptial agreement rendered null and void.  Good for him.  I do hope he wins against Kim – he is definitely the less offensive of the two.

But here is the truth: both Kim and Kris are completely useless famewhores who should be ignored and scorned.  But through some perverse twist in human evolution we have acquired a C-G gene.  C-G of course stands for Celebrity Gossip and most of us seem to have the gene.  It confers upon the carrier an almost limitless capacity to absorb and repeat celebrity gossip, sometime mutating the gossip during transmission – but has no other obvious side effects.

TMZ tells Kim Kardashian’s side of the story: Kim Kardashian’s telling close friends she is not pushing for a divorce so she can marry Kanye West — she’s saying Kris Humphries has simply become “a cancer” she wants out of her life forever.

Sources connected with Kim tell TMZ … after Wednesday’s court hearing, Kim said, “Kris is the first person I ever had to break-up with and that f**ked with my emotions.”  She added, when their marriage started to fall apart “He told our producers he would destroy my career and me if the show wasn’t edited right.”

Kim, who is telling friends she is “emotionally exhausted” from dealing with Kris, says if he really thinks he can convince a judge she defrauded him, wait ’til he sees the outtakes of “Keeping Up with the Kardashians” — which show Kris as a “manipulative, vindictive, petty, fame-hungry jerk.”

Kim is telling friends, “It’s all on camera and it’s going to backfire in his face.”

Did you catch that?  Kim is calling Kris a fame-hungry jerk!  That is like Rihanna calling Kristen Stewart a slut.  Of course Kim is wrong – not about Kris being a famewhore – that is obviously true – but Kim is wrong when she says this will backfire on Kris.  Every time Kris makes it to the news these days his value increases.  For Kris Humphries there is no such thing as bad publicity.