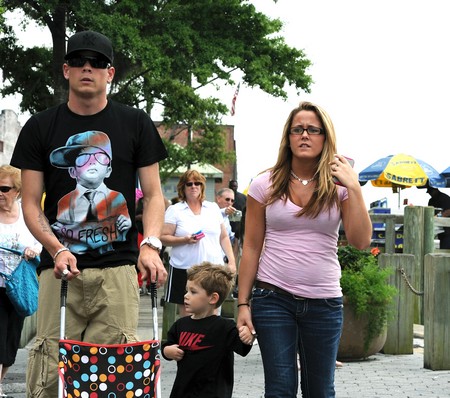 Jenelle Evans star of Teen Mom 2 and her fiance Gary Head have now adopted a pit bull puppy. When you hear that Jenelle Evans and Gary Head adopt you are glad to know it was a dog and not a human.  The Blue Nose Pit came with papers. Jenelle was tweeting about her excitement all day over the puppy they named Brody.

Seems like another thing for the two to fight about. I’m sure soon we will be seeing angry tweets over who is getting custody over the pup when the couple do there famous weekly break ups.

I do find it odd that the Teen Mom 2 star was so excited to get a pet but has showed no interest in getting custody back of her son Jace. Which she gave to her mother back in back in 2010 she gets weekend visits and pays child support. She’s clearly not stable enough to have full custody at this point and may never have full custody back.

She and Gary head have a dysfunctional relationship at best. The two have been on again and off again since the beginning of the year. They recently split up for a week and she was back with her ex Kieffer Delp the two had a nasty break up when he sold pictures of her before and after a breast augmentation surgery. With all these up and downs and guys in and out of her life not to mention the recent tweet from her fiance during there last break up claiming Evans had a Quaternary pound of weed in her apartment. This doesn’t see like a healthy environment for little Jace (or Brody) to be around