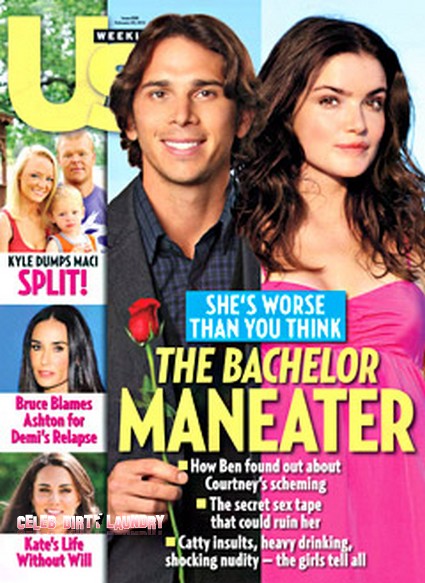 The current issue of US Magazine features the cover story ‘She’s worse than you think – The Bachelor Maneater.’  Of course they are talking about The Bachelor’s Courtney Robertson who is one of the ladies vying for the heart of bachelor Ben Flajnik.   They magazine claims to have all the details on how Ben found out what a scheming biatchy she is.   They go on to claim that she has a gasp.. sex tape, no surprise there.  Courtney stripped down to skinny dip with Ben Flajnik in Puerto Rico.  When they headed to Panama the ladies had to wear a  skimpy see-through bikini top made of beads.  While all the ladies wore their bras Courtney decided to go without her bra.  Courtney will stoop to any level to snatch a rose.

The other ladies of the Bachelor despise her and they are telling all about her catty insults, heavy drinking and shocking nudity.  Despite her (fake) charm, it appears that Ben is becoming a little skeptical on this week’s bachelor.  Ben’s new found feelings about Courtney are also tainted after two of the girls express their feelings about who and how Courtney really is.  Cannot wait for these details.  Seriously though if Ben cannot see what she is maybe he deserves her!  What do you think?

Also featured in this week’s issue Teen Mom’s Maci Bookout and Kyle King have split.  The couple who have been dating for about 1 year a a half were ready to get married.  Rumor has it Maci was pressuring Kyle so much he got cold feet and ran in the other direction.

US Weekly has the scoop:  “Maci wanted something way more serious,” explains an insider of Bookout, 20, who had been living together with her childhood pal since the summer of 2010. “She was never happy enough just being a couple. She always wanted more, more, more, whether it was a ring or another baby.  King wasn’t able to handle the pressure and “broke it off,” says the source. “It’s really sad because they love each other, but she pushed him away.”

To find out more news on the split and about The Bachelor’s Courtney, pick up the current issue of Us Weekly!