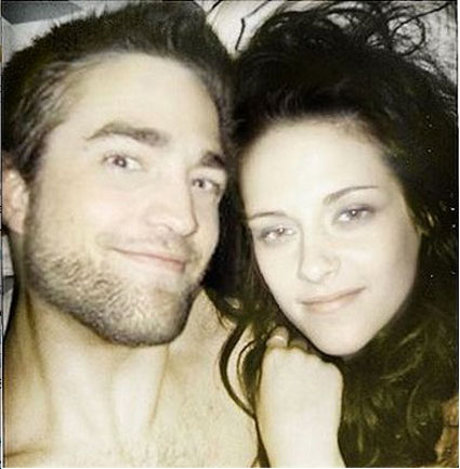 There has been a lot of buzz about Robert Pattinson and Kristen Stewart lately, especially regarding whether they are in fact still together or have officially decided to end things for good. There’s still a lot of uncertainty in the air, as is always true in the land of Hollywood. However, we do have one substantial piece of evidence that might suggest the couple is still going strong. A mysterious picture has surfaced, and the photo depicts the two in bed together! Do I believe it…?

What I can’t seem to wrap my itty-bitty brain around is the simple fact this picture of Pattinson and Stewart in bed together may look like a plain and simple photoshopped picture. And yes, that happens all the time, especially when someone wants a story to happen with two big name celebrities involved. If you ask me, his head seems a little lopsided-glued-on-and-attached-a-bit-funny. But hey, maybe that’s just how his neck rolls.

What makes this seem even more suspicious is the fact that none other than a fan sent this over to Perez Hilton. Sure, a fan might be able to get a hold of this picture but why of all places would you send it to his website and not somewhere a little juicier? I don’t know, say TMZ? But I digress. Regardless of whether or not it is actually a real picture of Pattinson and Stewart, one thing seems certain, we may never know whether or not these two are actually together or not since (thank God!) all the Twilight movies are over and out of the theaters.

So, what do you think, is the Robert Pattinson/Kristen Stewart bedroom photo real or not? Tell us in the comments below.