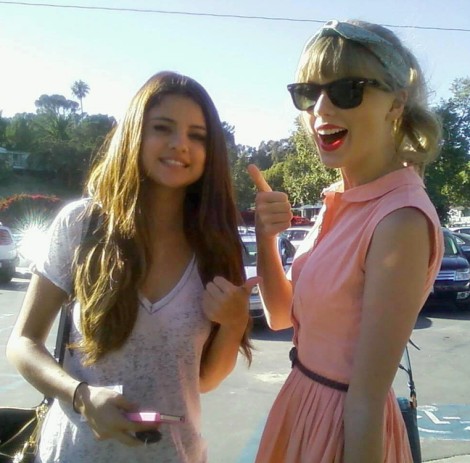 According to the ever-trusty and extremely newsworthy National Enquirer, Taylor’s had a crush on Bieber for years and they text or talk at least four times a day. Selena never comes up. Obviously, Selena is pissed about this and worried their friendship will be over if Taylor starts anything with the 18-year-old. Ah… ya think?

Wouldn’t it be great if this story was true? Not for Selena, naturally, but from a gossip perspective, this is right up there with Kristen Stewart in the Mini Cooper with Rupert Sanders. It’s the ultimate betrayal. Girls’ girl Taylor sneaking behind her best friend’s back to steal her ex-boyfriend. Obviously to the Enquirer, female friends truly have no loyalty when men (I mean boys) get in the way. But as much as I want to buy it, I can’t. It’s too much. Taylor’s way too savvy. She can date every dude in town and her image won’t take that much of a hit but Justin is off limits. First, I hope she knows he’s gross. And second, her fans would throw out some massive hate. Rebounding would be TOUGH. I doubt she could sing her way out of this one. LeAnn Rimes sure as hell couldn’t. And I like to believe she just wouldn’t do that to her friend. Am I too naive? Maybe. But I grew up in the heyday of the Spice Girls’ Girl Power movement. That shit’s just not cool.

Do you think a Taylor Swift/Justin Bieber hook-up would ever happen? Could the Selena Gomez/Taylor Swift relationship ever be the same afterwards?