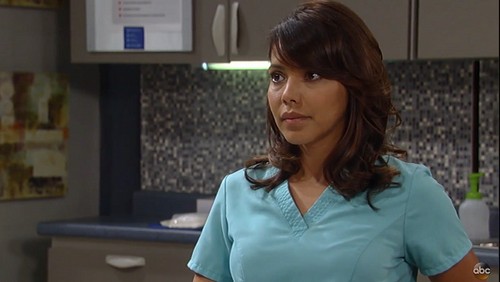 General Hospital weekly spoilers for December 8–12 tease another week full of action-packed episodes and shocking revelations. There’s never a dull day in Port Charles, and this week fans will learn a shocking secret about a relatively new character, and we’ll gear up to say goodbye to another fan-favorite. According to GH spoilers, this is what fans can expect to see on the ABC soap during the week of December 8.

Monday December 8: General Hospital spoilers tease there will be shots fired in Port Charles on Monday’s episode! There is no news yet on who will be on the receiving end of the gun fire – but it doesn’t look good for one of our GH characters. In other General Hospital news, comings and goings recently confirmed that Kelly Thiebaud is leaving the ABC soap, and she will break the news to her partner in crime Spencer Cassadine. Rumor has it Britt Westbourne will take Obrecht up on her offer and run away so that Nikolas can’t press charges against her.

Tuesday December 9: According to General Hospital spoilers for the December 9 episode, Anna Devane is in serious trouble – and may be turning in her police commissioner badge. Spoilers also tease that Maxie Jones will finally come to a decision about her relationship, or lack of, with Det. Nathan West. For those of you who don’t remember – the family court judge warned her that if she pursued a relationship with Nathan she would never see her daughter Georgie again.

Wednesday December 10: Crazy Franco and his even crazier counterpart Nina Clay are still hiding out with Ava Jerome’s baby and playing house. With all of the drama in Port Charles, the PCPD seems to have their hands full, and have been unable to track down the runaways and the stolen Corinthos baby. So, General Hospital spoilers tease that on Wednesday December 10th Kiki and Morgan join forces to track down Morgan’s daughter/sister.

Thursday December 11: General Hospital spoilers have been teasing the fact that newbie Rosalie has a major secret, and her former boss Nina Clay was blackmailing her with it. We knew when Rosalie arrived in Salem she would be linked to a resident of Port Charles, and we have all been racking our brains trying to determine who. Well, according to GH spoilers for the December 11 episode, Rosalie’s secret will finally be revealed!

Friday December 12: Friday’s episode of General Hospital will feature another awkward run-in between Jake AKA Jason Morgan and Carly, who still has no idea who the stranger really is. Meanwhile in Pentonville, GH spoilers tease that Sonny Corinthos is in serious trouble – too bad his right hand man Jason Morgan isn’t around to lend him a hand.

So GH fans, will you miss Britt Westbourne, or are you happy to see her go? Will Maxie risk everything to be with Nathan? Who do you think gets shot, or does the shooting? Which Port Charles resident will figure out Jake’s true identity first? And, what do you think Rosalie’s secret is? Share your thoughts and theories in the comments below and don’t forget to check CDL tomorrow for more General Hospital spoilers and news.