The Young and the Restless Spoilers: Nick Goes to Jail – Paul and Nikki Try To Save Busted Dylan – Abby Wants Stitch 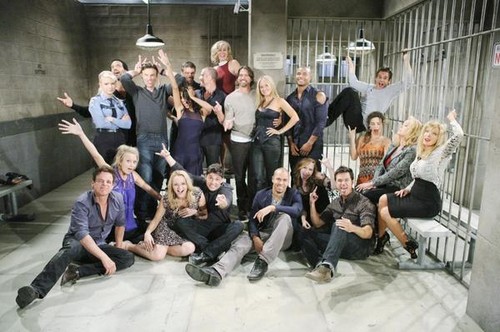 The Young and the Restless spoilers reveal that during the week of September 29 – October 3, Y&R fans will not want to miss a single episode! Y&R spoilers tease that on Friday October 3, Nick and Sharon are scheduled to say their “I Do’s.” But, it will be a miracle if they make it down the aisle. With Phyllis Newman back in Genoa City and dangerously close to remembering what happened to Summer’s paternity test, the odds are not stacked in their favor. Not to mention, Nick’s friends decide to take him out on a wild bachelor party, and they all wind up in a Genoa City jail cell!

Nick and his best men aren’t the only ones poised to visit the Genoa city jail. According to The Young and the Restless spoilers, there is a good chance Dylan might be sitting in the next cell over, because he gets busted on October 1! And, Christine isn’t exactly thrilled when Paul and Nikki Newman join forces to save their son on Thursday October 2nd, but Nikki has a tough time working with Paul and juggling her secret drinking problem.

Remember when Eileen Davidson returned to The Young and the Restless? Yeah, we almost forgot too since she hasn’t gotten hardly any screen time. But, according to The Young and the Restless spoilers for the week of September 29, she begins shamelessly flirting with her new employee Stitch while they are setting up at the Jabot lab. And, Y&R fans have predicted for a while now that Abby and Stitch might wind up together after she kissed him to make her ex jealous, and it looks like that unlikely pairing might become a reality, because rumor has it Abby is not happy with her mom flirting with Stitch.

So Y&R fans, what do you think Kelly will think when she comes home and finds Phyllis in her and Jack’s house? Awkward! Do you think Nick and Sharon will make it down the aisle? It sounds like Dylan might be arrested for Ian’s disappearance, do you think Nikki and Paul will be able to get him out of this mess? Did he really kill Ian Ward, or is he being framed? Let us know what you think in the comments below and don’t forget to check CDL tomorrow for more The Young and the Restless spoilers.