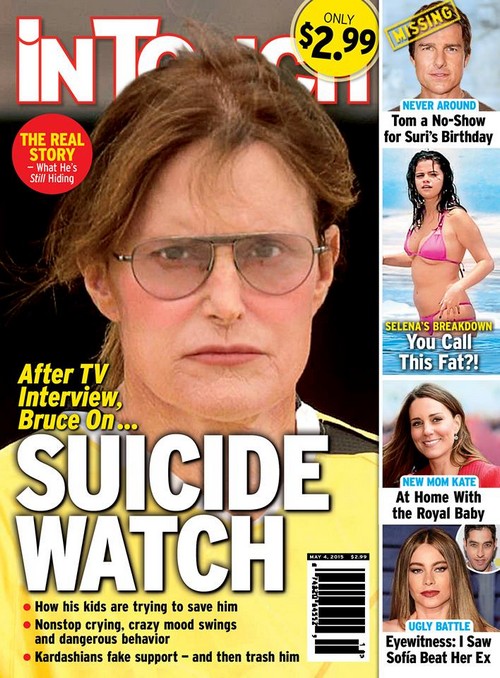 According to an outrageous report Bruce Jenner is on suicide watch after recording his Diane Sawyer interview scheduled to air Friday, April 24. The ads for Bruce Jenner’s TV interview with Diane Sawyer are quickly being ubiquitous, since it’s the first time that Bruce will actually come right out and admit that he’s a transgender person going through a sex change. However, the latest cover issue of In Touch Weekly alleges that after filming the interview, Bruce Jenner has actually been on suicide watch.

The report claims that Bruce Jenner has been showing some negative symptoms, including, ‘non-stop crying, crazy mood swings and dangerous behavior‘. And even though his kids are trying to ‘save him’, the Kardashians are mainly faking support for him and then trashing him every chance they get – especially his ex-wife, Kris Jenner. She still seems to be under the delusion that she can stop Bruce Jenner’s sex change from happening, which is a ridiculous and pathetic notion. But Kris Jenner places her image above all else, and she’s definitely placing her image above Bruce’s happiness and future health – but considering the fact that they were married for so many years, that’s not that surprising.

Let’s hope that Bruce Jenner gets some help from the right people, especially since the rate of suicide in transgender people is much too high already – and we really, really don’t need a famous transgender people attempting suicide or worse, succeeding.

In Touch also has a feature on Tom Cruise missing Suri Cruise’s birthday, which is keeping in line with his apathy concerning his daughter – i.e., Scientology’s attempt to keep him away from non-Scientologists, be they his ex-wife or his own daughter. Then, Selena Gomez reportedly had a meltdown over the backlash that her recent bikini pictures received – or more specifically, the fact that a vast majority of the Internet called her ‘fat’. But seriously, it’s the Internet – she should remember that most of the people criticizing her probably look ten times worse.

And finally, alleged eyewitnesses claim that they ‘saw Sofia Vergara beat her ex, Nick Loeb’. An attempt to make her look bad following the frozen embryo controversy, or the truth?