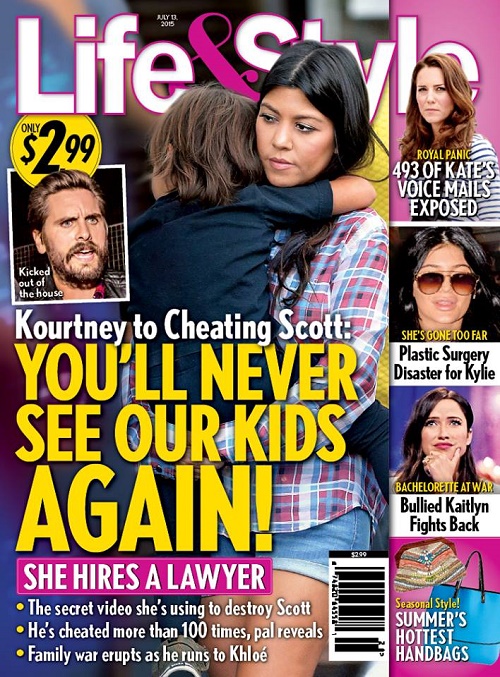 Kourtney Kardashian and Scott Disick’s latest breakup might actually be the real deal this time. It seems like every other month Scott Disick gets caught up in a cheating scandal, Kourtney dumps him, he goes to rehab for a few days, then she forgives him and they live happier ever after – until he cheats again. But Kourtney is apparently just as tired of the repetition as we are tired of writing about it. In June, reports hit the internet that Scott Disick spent four days holed up in a NYC hotel on a coke binge with a 21-year-old girl and, like clockwork, Kourtney promptly broke up with him. This time she says she is serious though!

According to a new report in the July 13 edition of Life & Style Magazine, Kourtney Kardashian is not taking Scott back – under any circumstances. And she has already called her lawyers to prepare for a brutal custody battle over their three children: Mason, Penelope, and Reign. A source close to the Kardashians dished to Life & Style, “She called Scott after the latest story about his infidelity came out and told him that he will never see his kids again. Kourtney told Scott that her lawyers will destroy him if he tries to touch her $44 Million fortune in retaliation.”

Kourtney is confident that she will be able to convince a judge that Scott is unfit as a parent – and let’s be real, he doesn’t really stand a chance in court. The guy overdosed and got his stomach pumped on national television. It’s not like Kourtney is lacking any evidence to prove that he cares more about partying than he does his family. And, frankly, we would be shocked if Scott actually tries to see his kids, isn’t this the free pass that he has always wanted? Now, he can truly party around the globe without Kourtney harassing him about his family obligations.

Kourtney has dumped Scott Disick more times than we can count. But Life & Style’s insiders seem to think this time is the real deal. Their source explained, “She knows she and her kids deserve better. Kourtney is finally ready to let go.” Do you think it is only a matter of time before Kourtney takes Scott back, or are they really over? Will Scott even fight for custody of the kids? Let us know what you think in the comments below!