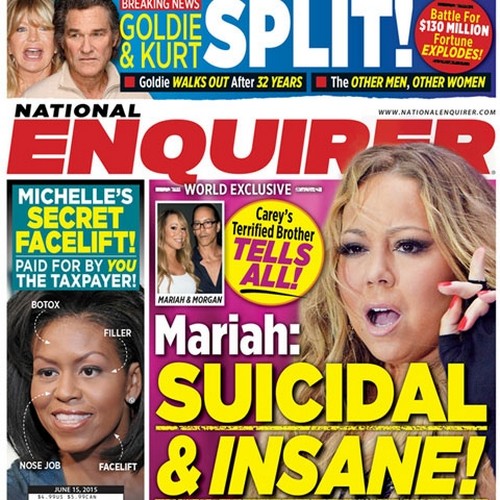 Mariah Carey is notorious for being a diva, but new rumors allege the singer is riddled with troubles including battling drug abuse and drinking problems. Mariah’s own brother, claims his singer sister is trying to numb her stress and problems with powerful medications and booze.

The latest issue of National Enquirer (via Radar) is packed with allegations that Mariah is suicidal and struggling with mental illness. Mariah’s brother, Morgan, allegedly told the media outlet his sister has lost control of her life and “spiraled into a pill-popping nightmare,” that has Carey battling her alleged mental illness with drugs and alcohol. It seems more like the plot of a soap opera, but let’s not forget the story is coming from National Enquirer and Mariah’s brother.

Morgan, Mariah Carey’s brother, told NE that he fears Mariah will suffer the same fate as Whitney Houston, if she continues down her current path. “She does not have a support system, and she is not mentally capable,” Morgan insists. The sibling of the superstar further claims Mariah “was drinking through her pregnancy, even while she was nursing!”

Rumors that Mariah Carey was drinking alcohol after giving birth to her twins, Monroe and Moroccan, swirled after a social worker reported Mariah Carey to the Department of Child and Family Services in 2011. The department cleared Mariah and claimed there was no merit to the allegations of the social worker’s report. The social worker fired back that the department was trying to do damage control and keep the celebrities who use their hospital facilities happy.

Mariah’s brother also told the gossip mag that he has never seen her when she hasn’t been drinking. “I can’t say that I have ever been around her when she was sober, and that’s very scary,” Morgan shared. Along with the booze, Morgan claims Mariah Carey takes a daily mix of meds including Zyprexa, Ativan and Depakote.

As far as Nick Cannon goes, Morgan isn’t a fan. “Nick was there for the cash from day one. He doesn’t give a damn about Mariah,” Carey’s brother revealed. “Nick took tremendous advantage of her and continues to do so.” Basically, Morgan insists Nick Cannon used Mariah and the kids to ensure a lifetime “ride” to the bank.

It should also be noted with Morgan’s allegations of Mariah Carey’s drug abuse, alcohol dependency, and mental illness, he also confirms another fact… Morgan hasn’t directly spoken with Mariah in two years. That aspect could make his accusations very questionable, or it could be concerning that Mariah is being surrounded by an entourage of handlers and people who don’t truly care about her and her health.

What do you think CDL readers? Is Mariah Carey in trouble and facing big issues like drug abuse and mental illness? Is Mariah’s brother, Morgan, telling the truth?