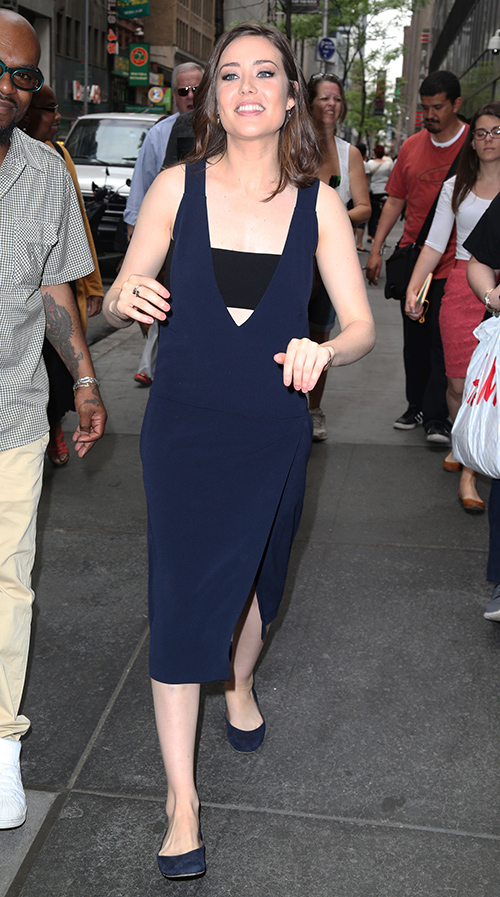 “The Blacklist” star Megan Boone is pregnant with baby number one. Boone, who you most likely know as Red’s partner-in-crime Elizabeth Keen, announced her pregnancy on Instagram on Monday November 16th. According to E! Online, Boone and her longtime boyfriend Dan Estabrooke (an artist) are expanding their family and sources have confirmed there is definitely a baby on the way.

Megan Boone and Dan Estabrooke are super private though, so details on the pregnancy are few and far between. For all we know, Megan could be 6 months pregnant or 6 weeks pregnant. A few weeks ago, Boone posted a bizarre photo on Instagram of herself wearing a T-shirt with the words, “The Future Is Female” written across her chest and teased that it was a gift from Dan. Megan’s fans are certain that the baby is a girl – seeing as how the shirt said, “The Future Is Female” and not “Male.” Who knows though?

“The Blacklist” fans are more interested in whether or not Boone’s pregnancy will be written into the NBC drama. Elizabeth Keen’s husband-turned spy-turned husband again Tom Keen (Ryan Eggold) just waltzed back into her life on the show and professed his love for her by killing and kidnapping a couple people to clear her name. If “The Blacklist” writers do plan on using Boone’s pregnancy in the TV show, now would be the perfect time to write it in. Maybe if Elizabeth Keen winds up pregnant it could get her a shortened prison stint after her crime spree with Red is over?

What do you think “Blacklist” fans? Would you like to see Elizabeth Keen and Tom Keen have a baby on the show? Let us know what you think in the comment section below!