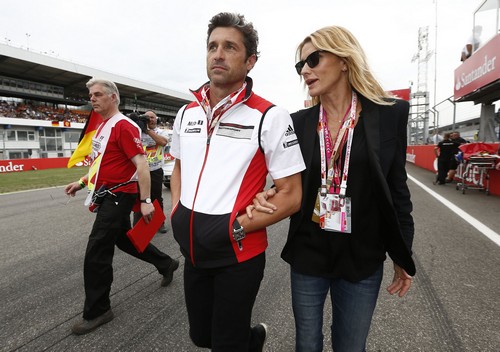 Fans were surprised when Grey’s Anatomy Patrick Dempsey’s wife of fifteen years, Jillian Fink, filed for divorce. As CDL speculated at the time, there was more to break up than media outlets were told. Patrick Dempsey’s “emotional and messy” on set affair is to blame for the divorce, and sources reveal the real reason the ‘Grey’s Anatomy’ star was fired and McDreamy is done.

According to Radar, Patrick’s affair with a “much younger staffer” started last August. The secret wasn’t very well kept, and everyone on the ‘Grey’s Anatomy’ set knew Dempsey was sleeping with the staffer. “Patrick would remain in his trailer after hooking up with her on set and refuse to come out,” the source revealed. Dempsey then began having issues with the show’s crew and writers, the source continued explaining, “He had also been complaining about the storyline of his character, and felt he wasn’t getting enough screen time.”

Remember when McDreamy was MIA from ‘Grey’s Anatomy’ and ran away to Washington? The real reason Derek Shepherd disappeared was because Patrick Dempsey was suspended from the show. The staffer having the affair with Patrick was also moved to Shonda Rhimes’ production offices.

Dempsey then returned to his role after the hiatus, but he was an emotional mess. Patrick was constantly late to the set and often forgot his lines. Jillian Fink then grew tired of the cheating, and filed for divorce in January. Of course, Patrick blamed the show’s schedule, stating he had been “spread too thin.”

Shonda Rimes is pretty crafty with drama. The writer’s shows are full of onscreen feuds, affairs, and scandal, but the sets aren’t short of juicy PR spectacles. Shonda’s shows have a track record for actors and their personal lives unraveling in the media. Last year on ‘Scandal,’ Columbus Short was killed off thanks to his string of arrests involving violent domestic abuse issues.

Let’s not forget the drama with Katherine Heigl. That ended with Katherine’s character being ousted from the show, and Shonda later telling The Hollywood Reporter she was happy with ‘Scandal’ because, “There are no Heigls in this situation.”

Before Katherine was axed, Isaiah Washington experienced the wrath of Rhimes in 2007 after grabbing headlines with his gay slur aimed at former co-star, T.R. Knight. Isaiah has since returned, and Shonda told EW, “My first decision and my first responsibility is to the story,” she says. “I have to be the keeper of the story and make sure that we’re telling the story we need to tell, regardless of whatever outside factors are involved or whatever history is involved.”

Now that Patrick Dempsey’s affair has been exposed, he has become a liability and an opportunity for press. Fans began boycotting ‘Greys Anatomy’ after Dempsey’s character was killed off, but as CDL reported, Patrick doesn’t seem to want to return. After McDreamy died, Patrick revealed “I like the played out.”

Shonda reportedly shut down cast and crew from talking about Dempsey’s cheating scandal. James Pickens Jr., who plays Dr. Richard Webber, gave a well-crafted and reheared interview that Us ran with. Pickens praised Patrick and would only reveal that when it came to the Dr. Shepher’s story and his end, the cast was kept in the dark. “We didn’t know a whole lot,” James confessed. “It was kind of on the fly. So whatever information we got, we pretty much got it kind of right before it happened.”

So, Grey’s fans…are you going to miss McDreamy? Did Patrick Dempsey need to go if all the affair rumors are true? Here is something to ponder: President Bill Clinton had sex with intern Monica Lewinsky and yet didn’t get fired, and in fact was re-elected – are today’s standards of expected conduct for actors higher than those for US Presidents?